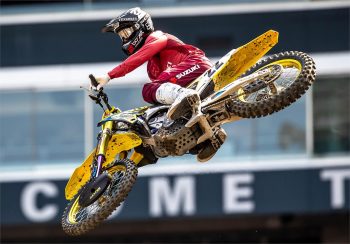 Australian supercross and motocross legend Chad Reed has declared going racing in the 2020 Monster Energy AMA Supercross Championship is his highest priority, however he’s acknowledged his future beyond a selection of off-season events in 2019 remains unclear.

The New South Welshman, who’s been contesting a selection of auto racing events, was thought to be remaining with the factory Suzuki team next year, however uncertainty within the squad over recent months has prompted Reed to assess multiple avenues for 2020.

Admitting he’s not stressed about locking down a deal next year, the number 22 is concerned about securing support and a bike for the array of off-season races he’s contracted to, including the Paris supercross, S-X Open Auckland and AUS-X Open Melbourne.

“I’m a little stressed, but when I say stressed, I’m stressed because I have off-season races that I’ve signed contracts for – I’m not stressed on January,” Reed explained on the RacerX podcast. “I have Paris, New Zealand and Australia – they’re right around the turn, and I had big goals of this off-season being one that’s such a different one to what it’s turning out to be.

“Now I’m a little on my back foot trying to figure out what to do. But I’m not stressed on next year – at this point, I’ve finally come to a point in my life – and it’s weird to sit here and say this because I’ve always been scared to say it – but I’m not scared anymore – I was always been scared of ‘what if I can’t race?’

“Do I want to race in January next year? 100 percent. That’s definitely the highest of high priorities, but I’m past the point of begging for a ride, begging for a job and begging for a good bike. I don’t have that in me right now.”

At 37 years of age, Reed holds the all-time podium record of 132 in AMA Supercross, and also boasts 249 starts in the premier class.