Lettenbichler and Walker complete the podium in Great Britain. 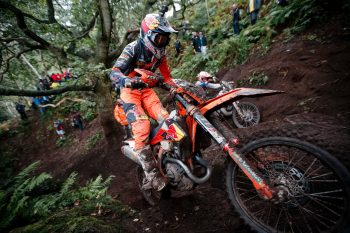 Starting from pole position, Watson got off to a steady start and positioned himself inside the top five throughout the opening stages. Completely at home on the sandy, technical track, he soon charged into the lead, extending his advantage to over three minutes as he crossed the line for the win.

“I’m super-happy to win today,” said Watson. “I felt a lot of pressure coming into this weekend because it seems everyone expected me to win. Obviously, I got second here last year, so was extra-motivated this weekend.

“I won the sprint enduro yesterday, which gave me some confidence, but then I got a bad start today – I risked starting in gear and it didn’t pay off unfortunately.

“I made some aggressive passes early on and managed to get out in front. I felt so comfortable from then on to be honest, the bike was great and I was just able to ride fast and smooth and control the race from the front.”

The podium was locked out Manuel Lettenbichler (KTM) and Jonny Walker (Red Bull KTM Factory Racing). Watson will represent Team Great Britain at the Monster Energy FIM Motocross of Nations (MXoN) this weekend in Assen, the Netherlands, while the next stop of WESS is scheduled on 5-6 October at Bassella in Spain.