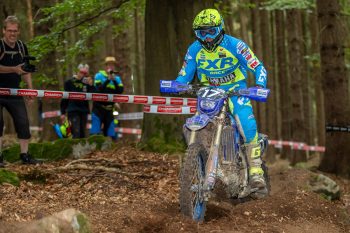 Australian Wil Ruprecht scored his first J1 victory of the season last weekend at the Czech Republic’s sixth round of the 2019 Maxxis EnduroGP World Championship.

The Johansson MPE Yamaha rider, who forced out of the previous round with an ongoing virus, dominated the junior ranks during the opening stage before recording an eighth place result in class on stage two.

“Unreal weekend in Czech,” said Ruprecht. “Thanks to Johansson MPE Team and also Malardalens World Enduro Team for the craziest support crew ever! It was nice to share a win with such legends. The struggle with the virus is still far from over, but we are a step ahead of where we were mid-season! We will keep fighting.”

Ruprecht is currently ranked fifth in the J1 standings as EnduroGP heads to Ambert in France on 28-29 September for the final round of the championship.