After sampling the entire fleet of the 2020 KTM EXC-F and EXC models at the international media launch in Spain earlier this year, MotoOnline.com.au was recently invited to KTM Australia’s media trail ride, allowing us to test the bikes locally in the Southern Highlands of New South Wales.

We were lucky enough to have KTM motorsport manager Glenn Kearney and local trail guru Steve Robertson as tour guides, who tailored a ride through a variety of terrains with just over 110 kilometres of mostly single-trail.

The ride started off from a Medway farm just outside of Berrima and crossed the freeway into Belanglo State Forrest, where we were greeted with some awesome single-trail between the pine forest plantation, through to some steep rocky hill climbs and tricky descents, that was followed up with some great fire-trail. 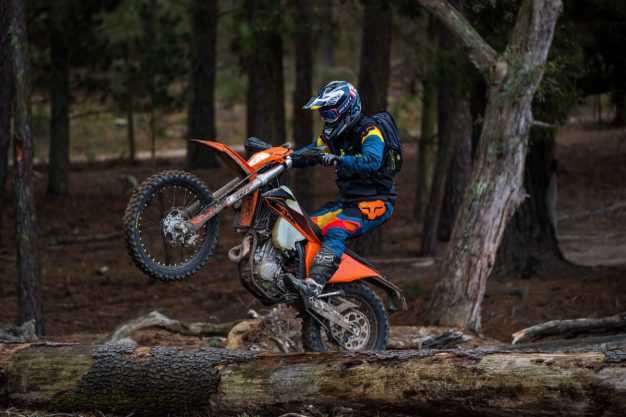 Just before lunch, we stopped off at a nearby farm with a mint grass track. Following that, we were treated to more fire-trail and some more technical hill-climbs and fun single-trail. At the end of the last generation KTM launch, I was thinking that these bikes have got to be getting close to being pretty much perfect.

For 2020, KTM has made a complete overhaul with a number of significant refinements from the previous model. Pointing out the bleeding obvious is the all-new bodywork, while the weight has been reduced and the motorcycle now has a slimmer feel, especially around the exhaust number plate area that now features a symmetrical design to the opposing number plate.

Continuing with the bodywork, the airbox has been redesigned to improve airflow while using the same air-filter as the former generation, as the engine now boasts improved efficiency and delivers more power with an all-new electronics package and exhaust system to match the new engine. Plus, the cooling system has been revamped. KTM has revised the software and electronics package for the 2020 EXC-F range with an all-new Keihin engine management system and throttle body, which has improved the throttle response across the board. 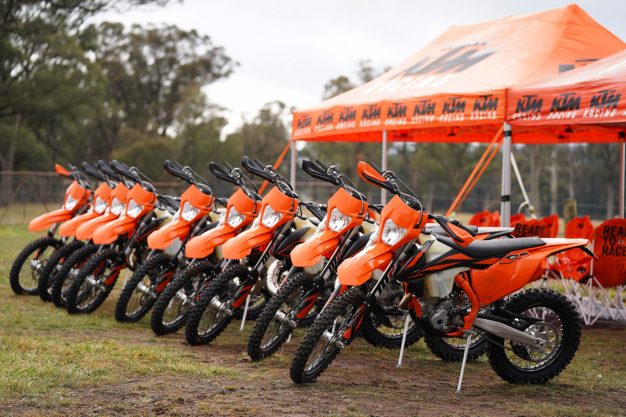 The EXC two-stroke range has also received changes to the software and electronics package with a better all-around package that brings better control from ambient air pressure, throttle valve position, water temperature and optimising the ignition timing and amount of fuel to inject at altitudes and conditions – something that is very complex with so many different variations in conditions. KTM has moved forward in a positive way compared to the first generation of TPI motorcycles.

Improvements to the chassis have been reached with greater stiffness to improve handling, along with a new WP Xplor 48mm fork and shock. As you come to expect from the Austrian manufacturer, the EXC-F and EXC range is fitted out with some of the most premium components on the market, including Brembo brakes and a Brembo hydraulic clutch, Giant rims, Neken handlebars, electric starter and Maxxis tyres. 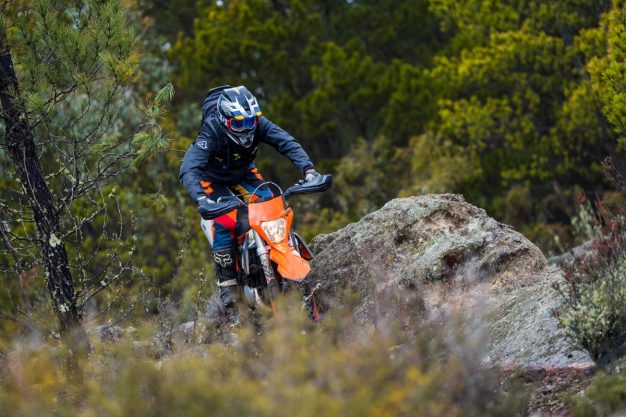 For me, it comes down to two bikes, the 350 EXC-F and the 500 EXC-F. The 350 EXC-F does everything easily – it’s lightweight and corners really well, and for me, it’s the complete package. If you’re feeling racey on the trail, then you can push it and you don’t have to necessarily wear yourself out in the first 20 minutes of the day, plus it’s got plenty of power to pull you along.

On the other hand, the 500 EXC-F plays right into the hands of the ‘lazy man’ rider – it’s got all the power Toby Price or Hattah winner Daniel Milner could ever need, yet handles almost as good as the 350! For me the 500 EXC-F is near spot-on as, like I mentioned, it’s got horsepower in spades, but I only need a portion of that. The torque that this motor delivers makes riding this bike almost like an auto in the bush, I could pretty much wear out third gear. Aside from a little clutch action and on the fire-trail, the bike rarely needed shifting.

The only area I felt the 500 may have come up short in comparison to the 350 is in the handling, which is due to the extra weight and inertia generated from the engine. The 2020 500 EXC-F is noticeably easier to keep from stalling at low RPM in tighter conditions to the previous model, as the new bike has a revised engine management system and this was an area that was identified as being of concern on the previous generation, but KTM has ironed this out for 2020. 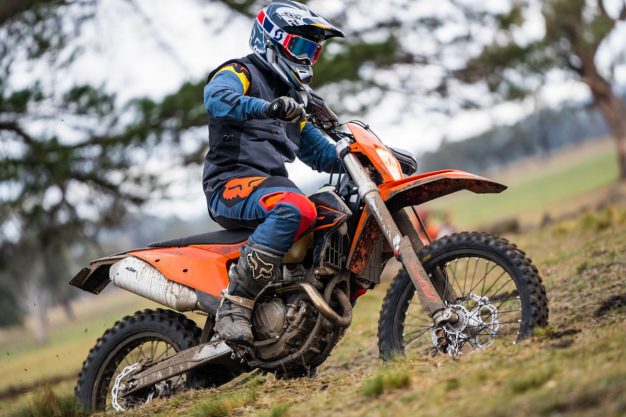 An aftermarket KTM part that would be on the list to purchase with the 500 EXC-F would be the traction control and mapping switch. This would make the 500 EXC-F a little easier to ride over a larger range of terrains and conditions, so it’s something to think about if you are drawn to the larger capacity machine. This was fitted to the model we tested in Spain and is a factor that we can vouch for.

The 250 EXC-F definitely has its place, because the bike is a pleasure to ride and you can’t find a fault. If you’re racing or just tearing up the trail, this bike will serve you well. For a 250 four-stroke, there is plenty of power and the handling is sharp. There is no denying that the smallest capacity of the EXC-F range is an absolute weapon, but for me, it just doesn’t excite me as the 350 EXC-F does.

In addition, the 450 EXC-F has been a great trail bike for so long and it continues to deliver as an outstanding motorcycle and continues to show why it’s such a great performing bike in the off-road world. Like I mentioned earlier, it is hard to pick out a bad bike – it just simply doesn’t exist in the KTM range whatsoever, it’s more about which bike you prefer. The best way to work this out is by trying to line up a demo day with a local dealer and to try them for yourself. If you have your heart or eyes set on one of the bikes particular, then you won’t be disappointed in the slightest. 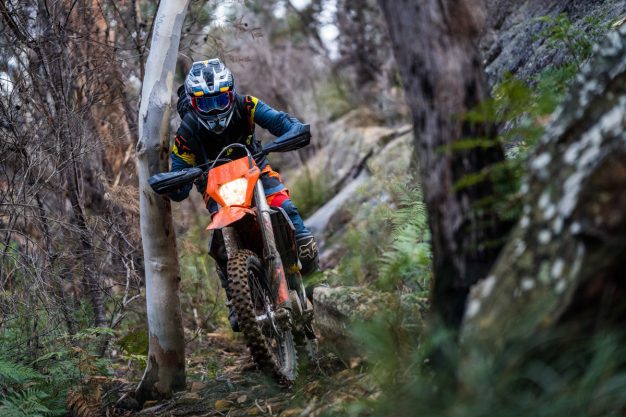 The last generation of the EXC range saw the much-anticipated rollout of fuel-injected of two-stroke and, for 2020, they’ve perfected the technology, making for an incredible fleet of enduro two-strokes. Now into the second generation of TPI motorcycles, KTM has refined what they have learned over the past years and continued with the development of the injected two-strokes, which is now standard across the range including the newly-added 150 EXC TPI ($11,795) alongside the popular 250 EXC TPI ($13,395) and 300 EXC TPI ($14,695) models.

The obvious benefits of fuel-injection stretch beyond not needing to pre-mix fuel, because the engine is far more efficient and the power is much more usable and smooth – something you notice right off the bottom. Jetting is cleaned up and there is obviously no need to ever change jetting from sea level right up to the higher elevation.

Choosing your spice from these three is a tough task and you can be swayed so easily depending on where and what kind of terrain you are riding, because they all work so well and they each have their own little reason as to why they’re so much fun to ride. Over the course of the test day we were able to experience a wide range of conditions on each of them. 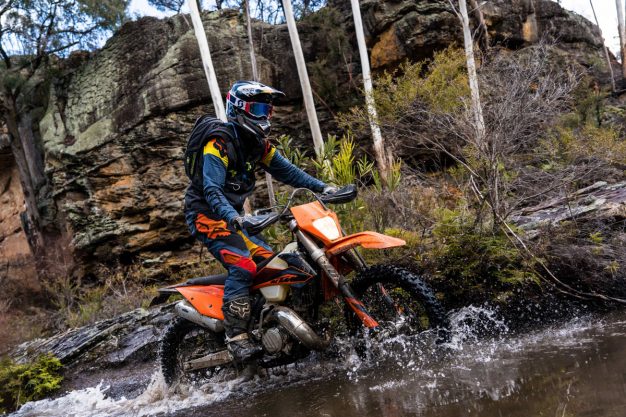 For me, the 300 EXC TPI was the pick. It has plenty of power and is really easy to ride and lug around in a gear or two higher, but when you get into the trickier conditions like steep rocky climbs or getting the front wheel up over an obstacle like a chest-high rock, or even just getting the front wheel up and over a knee-high log, the power is right there. You haven’t got to put too much thought or effort in to get the motor to respond, unlike say the 150 EXC TPI, where you need to ride using all of the gear-box and keep the bike singing to ensure you have the power to do what you need to at any given time.

Speaking of the new 150 EXC TPI, it’s such a different bike than what I was expecting, mostly due to the torque down low which made riding this bike a little more fun at slower speeds on the tighter, more technical terrain. This bike is so much fun to ride on single-trail, mainly due to the weight of the bike and the lack of inertia within the motor – the bike really feels like an overpowered mountain bike in some ways!

On flowing trail, the motor can handle a gear higher and you can really push the bike around to where you want it. If you’re a lazier rider like mysel,f where you like to ride a gear higher on the single-trail and use the power of a larger displacement bike a little smoother, the 150 might not be the right bike for you. This bike loves to be revved to the moon and, although it’s got great torque down low, you really need to get the motor moving to get the most out of it and that requires a lot of gear shifting and plenty of use of the clutch. 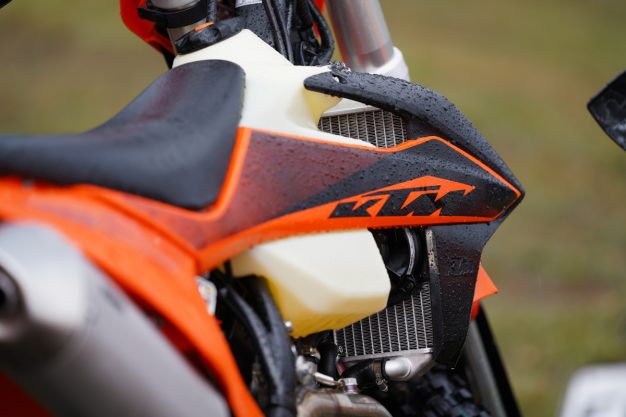 As much as I loved riding the 150 on the single-trail, I found myself on a couple of occasions in the wrong gear on blind corners being in a gear higher and cruising through the corners using the bottom-end of the motor, but then being confronted with a small log or rock ledge after a blind corner, which would typically require a gear lower. This highlighted for me the fact the riding a 150 EXC TPI, you need to be on your game. Although, on the open trail wringing its neck is so much fun and it sounds so good, even if it does require far more rider input than the 250 or 300.

Last of the two-strokes for me is the 250 EXC TPI. By no means is this a bad bike, it just doesn’t suit the way I prefer to ride. The motor has plenty of power and loves to be revved as well, so I could see this being a really fun bike if you are riding more grass track and motocross-type tracks, otherwise lots of fire trails and more open terrain trails. The 250 EXC TPI really has a lot of snap to its power delivery, which I didn’t find worked as well on tighter trails as the rear wheel would lose traction even easier off the bottom than the 300 EXC TPI. 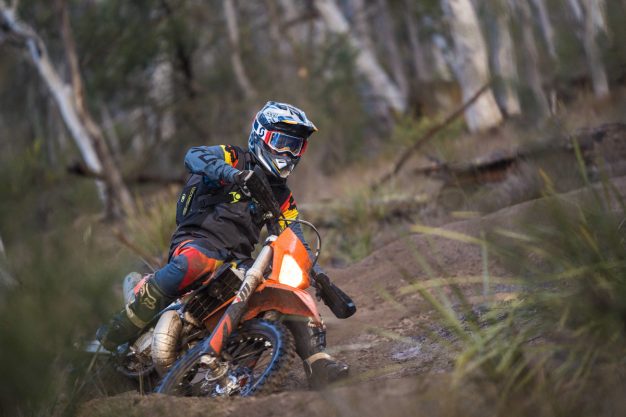 At the end of a full day trail riding on all of these bikes, it’s impossible to find a bad bike amongst them and going on the wide variety of terrain that we experienced, it’s hard to really pinpoint what bike is my personal favourite – there are so many different scenarios that present themselves on each track or trail that would best suit a different bike.

There is not a bike in KTM’s line-up that wouldn’t be suitable for every type of riding or rider and riding style, from beginner all the way to racing professionals. The best way to work out which bike is for you is to get to your local dealer and tee up a test ride, because chances are you will certainly find your ideal match. For more information on the 2020 KTM enduro range, visit www.ktm.com/au. 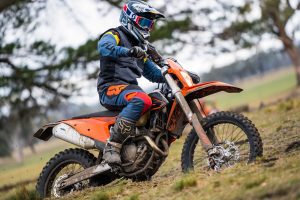 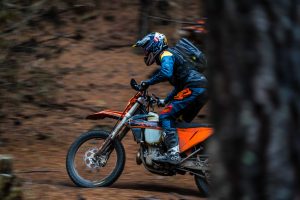 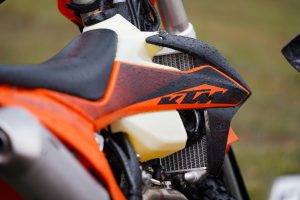 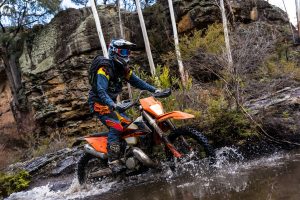