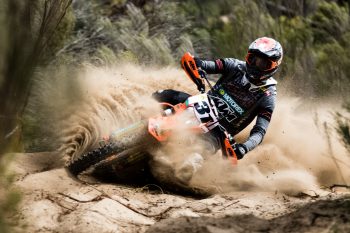 KTM Enduro Racing Team’s Daniel Milner has inched closer to securing the E2 title after earning a pair of victories at Coonalpyn’s eighth and ninth rounds of the 2019 Yamaha Australian Off-Road Championship (AORC) in South Australia.

Milner once again rode commandingly throughout the weekend, maintaining his undefeated winning streak in the category to stretch his points advantage to 27.

The Victorian will have the opportunity to claim the championship as soon as round 10 at Hedley, which will host the final two rounds of the series.

“The tracks this weekend were so good and it was awesome to finally have a deep sand round,” said Milner. “Saturday’s track was pretty full-on because it was fast in whooped out sand, but today was different because it had a mix of everything including rocky sections and sand again.

“We had the KTM 450 EXC-F working really well though, which was fortunate for me, so I’m pretty happy to come away with the E2 wins both days. I will continue to focus from here, look to wrap up the championship at Hedley and I’m excited to get there already.”