Knee injury puts Lawrence out prior to Pro Motocross finals

Geico Honda rookie ruled out of Ironman and Motocross of Nations. 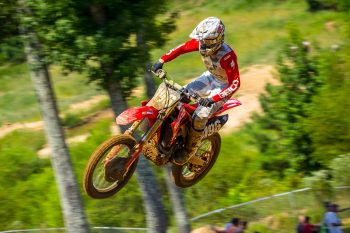 Australian export Hunter Lawrence will miss tomorrow’s final round of the 2019 Lucas Oil Pro Motocross Championship in Indiana after suffering a serious knee injury while practising.

The Geico Honda rider has endured a trying first season in the US, indicating that he has possibly torn his ACL and meniscus, in addition to a mild MCL sprain.

“When it rains it pours… it’s been a very rough past month,” Lawrence posted on social media. “Two days ago whilst training, long story short, my foot hit the ground and twisted the wrong way. To say I’m gutted is an understatement – bit of a rock-bottom moment for the year.

“I don’t doubt I will be back, nothing but another little bump in our road to success. The plan now is simple, rehabilitation and get back to 100 per cent. Thank you to all of my supporters, sponsors and team – appreciate you guys so much. Not how we wanted to end the year, but hey.. s**t happens. I will be back.”

Lawrence missed the entire supercross season after suffering multiple broken collarbones before being able to make his anticipated debut and then he later broke his collarbone again during the outdoors after experiencing a bike malfunction.

If the extent of Lawrence’s latest injury is as severe as initially suspected, it will definitely rule him out of representing Team Australia at the upcoming Motocross of Nations (MXoN) to be held at Assen, Netherlands, on 28-29 September.