Herlings a late inclusion for MXGP of Sweden this weekend 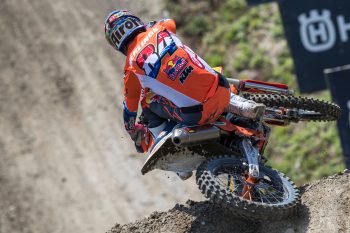 Herlings missed the opening half of the MXGP World Championship after injuring his foot while training in Spain during the pre-season, making a return at Russia’s eighth round before injuring his ankle in a bizarre sighting lap incident at the MXGP of Latvia.

The Dutchman was recently named in The Netherlands’ Monster Energy FIM Motocross of Nations (MXoN) squad – the country that will host the event in Assen – which remains the sole focus for Herlings.

“Here we go again,” Herlings stated. “I’ve been riding for a couple of weeks now and feel ready to try Uddevalla. As I’ve said, 2019 is only really about the Motocross of Nations for me at Assen next month and by trying the motos in Sweden we are making another step towards that goal. There is no target for this weekend other than to finish the races and find some good feeling on the bike.”

Red Bull KTM Factory Racing team coordinator Dirk Gruebel added: “It’s good to have Jeffrey riding and racing again but we have no expectations for this weekend. He is still on the way back and has chosen to use Sweden as a good opportunity to make some starts and build his speed against top level opposition.

“As a team we’ll be ready to give him whatever he needs to be able to race but we know this is just another step towards a full recovery and hopefully a chance to go into post-season testing with a good condition.”