Premature end to the 10th round of outdoors for factory KTM rider. 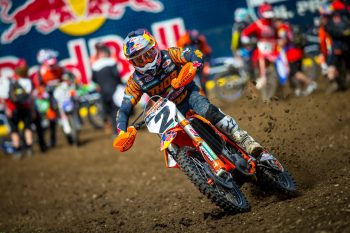 Webb didn’t get the best start in the opening encounter as he rounded the opening lap in ninth, he immediately put his head down and charged up to sixth by lap five, where he sat within striking distance of a top-five position.

With about five laps to go, he ended up pulling off the track due to pain in his left knee. The recently crowned Monster Energy AMA Supercross champion elected to sit out race two, while early reports of the injury suggest it could end his season prematurely with two rounds still to go.

The number two is currently ranked sixth in the championship standings ahead of this weekend’s Budd Creek national, marking the penultimate stop of the series.