Australian contender confident of return ahead of Assen's 2019 event. 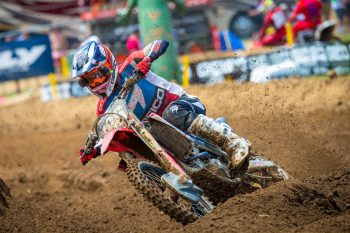 Injured Geico Honda rider Hunter Lawrence has declared his availability if selected for Team Australia at this year’s Monster Energy FIM Motocross of Nations (MXoN), despite recently breaking his collarbone.

Lawrence suffered the injury after experiencing a mechanical malfunction while training, however he’s hopeful of making a return for the final rounds of the Lucas Oil AMA Pro Motocross Championship, while ensuring he’ll definitely be ready for the prestigious event in Assen, The Netherlands, on 28-29 September.

“I’ll do that still, that’s eight or nine weeks away now, so I’ve got plenty of time,” said Lawrence when speaking to Swapmotolive. “I still want to race as many nationals as I can – if I can do the last two, that would be sick for the team and myself. It’s two more tracks I haven’t ridden, so if I can do them, it’s better for next year.

“At the same time, it depends how much I lose with bike skills, fitness etc. You don’t want to come back from fighting for race wins, come back, work my arse off and get 12th. We’ll see how we go, but for sure, nations, if I get selected for that, we’ll definitely be doing that.”

Lawrence has featured on the Australian squad two times in his career, finishing first overall in MX2 in 2017 followed by runner-up honours at last year’s edition.