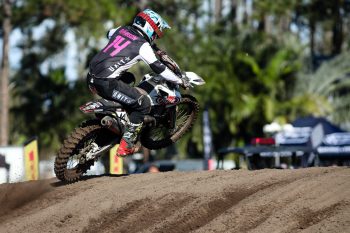 Dobson was strong challenger all season long, making Superpole on numerous occasions while being a regular inside the top five. A pair of solid P5 moto scores at Coolum’s 10th round on Sunday ultimately saw him seal eighth in the championship standings.

“In the end, I’m really happy with the pace I had all weekend, and although I believe I had the potential to finish the season with a better result, I’m happy to have been consistent with two fifth places on Sunday,” Dobson explained.

“It’s an honour getting the Andrew Mcfarlane Top Privateer award, it’s been a tough year and I can’t thank everyone enough that has helped me and supported me along the way.”

Davey Motorsports KTM’s Wills wound up sixth in the MX2 standings, scoring a podium finish at Moree’s eighth round of the series.