The 10 factors that led to a DPH Husqvarna double in season 2019.

The 2019 Pirelli MX Nationals proved to be an incredible 10-round series that served up a number of triumphs and tribulations, making it one of the most interesting and exciting Australian motocross championships in recent years. In this instalment of Countdown, we highlight 10 storylines that defined the 2019 series. 10. Appin’s mudder:
It wasn’t the way anyone wanted to start the season, but Appin’s opening round proved to be a horrendously muddy affair that ultimately prompted officials the cancel racing after the first motos. The conditions were some of the toughest we’d seen, as riders struggled to navigate the rain-soaked circuit.

9. MX1 first for Clout:
In his third premier class campaign, CDR Yamaha Monster Energy’s Luke Clout finally emerged with his maiden MX1 overall victory at Wonthaggi’s second stop of the year. Clout went onto challenge for the crown, adding another win to his name at Maitland while featuring regularly on the podium for second in the final rankings.

8. Waters’ Wonthaggi DNF:
Todd Waters (DPH Motorsport Husqvarna) lost the red-plate just as quickly as he got it following an unfortunate DNF at Wonthaggi’s second round of the series. The Queenslander was involved in a first crash that saw his subframe destroyed, forcing him to relinquish the series lead and suffer a significant points loss. He rebounded to take out the moto win in race two.

7. Todd’s Murray Bridge mechanical:
It was the moment that tightened up the MX2 title chase in opening off the season when Wilson Todd (DPH Motorsport Husqvarna) suffered a bizarre mechanical at Murray Bridge, completely destroying a rear wheel while battling with his championship rivals. He pitted, changed the wheel, and returned to circuit – but the damage was done, losing a bunch of valuable points he built up at the beginning of the season.

6. Webster rises:
After a number years in the MX Nationals showing glimpses of his potential, Penrite Pirelli CRF Honda Racing’s Kyle Webster rose to occasion in 2019, taking the MX2 title down to the final moto of the year. This season saw Webster land on the podium six times with three overall victories to his name, granting him vice champion honours. 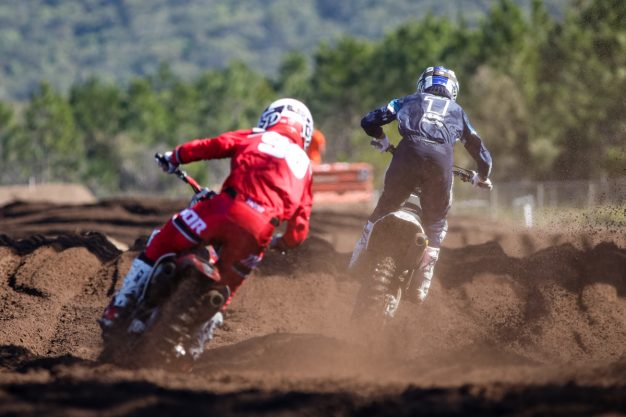 5. Moree’s shortened schedule:
It’s crazy to think two of the 10 rounds were reduced to just a half day of racing, but that’s exactly what happened at Moree’s penultimate stop under unique circumstances. An unusually high amount injuries meant Race Safe was at its limits, while the local regional hospital also reached its capacity as an event in the area also took place, forcing the MX Nationals to call the day off halfway through.

4. Gibbs ruled out:
Murray Bridge was a talking point for more than one reason, and one of them was the fact Kirk Gibbs ultimately ruled himself out of the championship fight after injuring his shoulder during Saturday’s racing. He was forced to withdraw from the weekend altogether, however returned to racing following the mid-season break at Gympie’s sixth round.

3. Ferris returns:
Three-time defending champion Dean Ferris made his intentions clear last year that his plans for 2019 were to race in America, so it came as a huge surprise when he made a one-off appearance at Murray Bridge’s double-header aboard KTM machinery. He captured victory in typical Ferris fashion on the Saturday, but was unable to land on the podium in Sunday’s proceedings.

2. Mellross’ untimely injury:
After Gibbs was essentially ruled out of the title chase at Murray Bridge, it became a three-man race between Mellross, Clout and Waters. That all unravelled for Raceline KTM Thor’s Mellross at Moree’s penultimate stop, where he suffered a season-ending knee injury just two laps into practice. He pushed through to race the remainder of the day and Coolum’s finals, although the injury was too severe and he wasn’t able to challenge for the championship.

1. Coolum domination:
Without a doubt, the most defining storyline of this year’s MX Nationals was the domination of the two eventual champions, Waters and Todd, at Coolum’s double-header finale. The most brutally demanding circuit on the calendar, and with the titles on the line, the pair rode commandingly and dominantly in their respective categories to be crowned as deserving champions.