Injured MXGP rider signs on for next year's world championship. 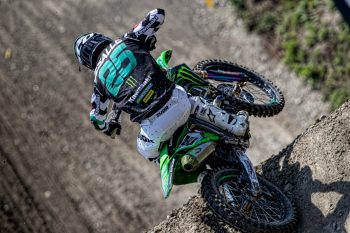 Monster Energy Kawasaki Factory Racing has renewed its contract with Clement Desalle for the 2020 MXGP World Championship, which will see the Belgian rider embark on his fifth season with the squad.

Desalle, who’s been sidelined with a leg injury after a horrific crash at the MXGP of Russia, says the injury was no reason to end his career, and that he’s excited continue with the factory Kawasaki team.

“I never had any doubt about my future,” said Desalle. “I know where I want to go, I know what to expect and for me there was no reason to stop my career after my injury. I have a good feeling when I practice in different sports, and I still have a huge motivation.

“I know that even if the level of my rivals is very high I can battle for the win, and when I’m at the start gate my goal is always to win. And I have a great feeling with the team – you need a good team and a good bike to win, and I have all of this with KRT where they offer me great working conditions.

“I got the green light from my doctor to start riding my bicycle on asphalt, and in a few weeks I will be back on my mountain bike, then my enduro bike and finally my motocross bike. It’s great to be able to have some activities, and it’s a good mental stimulation – after my knee injury earlier this season the goal was to be back racing as soon as possible, but after this injury in Russia I knew that it would take a fairly long time as I couldn’t do any activities for several weeks.

“The goal has always been to take the necessary time to be back at 100 percent, so I have not set a specific date for my comeback. Of course it’s difficult to watch the races on television as you would like to be in action on your bike. We’re used to a very intense life – at each race we produce a lot of adrenaline and I’m missing that so much.”

Desalle’s current teammate, Julien Lieber, is also on the sidelines with injury, prompting the team to draft in Tommy Searle as a fill-in rider.