It was an incredible weekend for Todd Waters at Coolum’s 2019 Pirelli MX Nationals double-header finale, the DPH Motorsport Husqvarna rider picking up two dominant overall victories on his way to a maiden premier class championship! 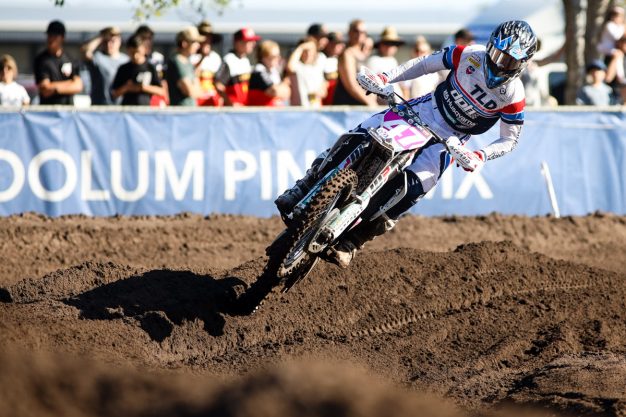 Congratulations on taking out the MX1 championship, you must be so proud of yourself and also relieved to get the job done after so many years in the game…

Yeah, first of all, hats off to every in my team – I’ve got a close team of people around me. It’s a great feeling and something I’ve been chasing for many, many years. They reckon your first championship is the hardest one, and it has been – it’s hasn’t come easy, that’s for sure. I wouldn’t say relieved, I’m excited more than anything. It’s a good step for the future, and hopefully we can keep kicking goals and get some more.

You rode commandingly and dominantly all weekend long, from Superpole on Saturday through to the final moto on Sunday. Right from the beginning of the weekend, did you feel you were ‘on’?

My goal was to win the last five rounds – at the start of the year, I just wanted to be in the hunt, and in the break I wanted to go the states, work hard and get the last five. I almost did that – I stuffed up at Maitland, unfortunately I was ‘off’ there and it didn’t pan out, but I won the other four. I set a plan and a bunch of goals, and worked hard for it. I won at Gympie and Moree, but at Coolum, we only had five points in the championship. Leading in I was super focused, and on the day, I just felt different – I was hungry to win.

It’s been an incredible campaign for your team DPH Motorsport Husqvarna taking out both the MX1 and MX2 championship, what’s the energy like within the squad at the races?

The biggest thing is that they just keep it simple – there’s no rocket science to it. People try to complicate things too much, but they just keep it simple and leave it up to us. That’s where a lot of teams go wrong – they try and control the riders and think they know best. DPH, they just did their job, and that was to supply a bike at the races for us to race – that’s what they did – they didn’t try tell us how to race or anything like that. Dale drove the truck, Tash had our lunches there, and they supplied an awesome atmosphere and everything we needed – we didn’t have them in our ear telling us how to do things, and it showed – they left it up to us and we got the job done in both classes. One thing I noticed this year is that you seemed really happy and really excited to be at the races. Did that contribute to you being crowned champion in the end?

Yeah, definitely. That’s the only reason, really. The massive thing was the atmosphere under the truck that I just explained, but the bike – I loved the bike. It’s not rocket science – when you enjoy riding a dirt bike, you’re gonna get results. Pretty much, that’s what it was for me. I struggled years before in the past with not being comfortable with things, but the Husqvarna suits me and my style. I was burning through practice bikes because I just loved riding it.

With the title in hand now, are you hoping for a spot on the Australian MXoN team, or is supercross the priority from here onwards?

I’m at the point in my career where I’ve done MXoN, raced world championship races and stuff, and I’m content racing here in Australia. I’ve got a good team backing me, and I’m enjoying racing here. For me, it’s a difficult one – of course I want to race MXoN – it’s the biggest race in the world, but on the other hand, there are young riders like Wilson Todd and a bunch of guys that I’d like to give the opportunity to them. MXoN is such an important weekend and can change your life as a rider, like it did for me. I got onto the MXoN team when I was 22, and the next year I had a factory ride with Husqvarna in MXGP. It’s the one place where you can show what you’ve got, and you’ve got nothing to lose. Wilson is in a position where he’s wanting to get a ride overseas, and instead of me taking up a spot, I’d almost prefer to give him a chance. They’re my thoughts on it at the moment.

Supercross is coming up in the next couple of months, it’s been a while since we’ve seen you complete a full campaign, is a title the target in that series also?

Yeah, we’re always trying to chase a title. Like I did this year, I’ll just focus on what I’ve got to do. I’m gonna try and bring the best I can bring to supercross. We’ve got some great competition coming over – Justin Brayton will be here defending the championship, and I’m not sure who else is coming out, but you’ve got young guys like Luke Clout and Dylan Long who are good at supercross, so it’s gonna be a ripper season. I’m looking forward to it.