Raceline KTM Thor’s Hayden Mellross will push through this weekend’s double-header finale of the Pirelli MX Nationals at Coolum after injuring his knee in Moree one week ago, which requires season-ending surgery that will ultimately sideline him for the upcoming Australian Supercross Championship.

The popular New South Welshman has been feature of the MX1 category this season, taking control of the points standings in the early stages and remaining in title contention at the season’s end, despite suffering a major blow in the opening laps of practice at the penultimate stop last week.

“I’m here racing this weekend, I’m only 14 points off the lead,” Mellross explained to MotoOnline.com.au. “I suffered a knee injury at Moree, but I’ll give it a red-hot crack and see what happens.

“I got the MRI on Monday, and it turns out I’ve completely torn my ACL, torn my meniscus and fractured the top of my fibula. So it’s definitely not ideal. I’ve been booked into surgery in a couple weeks’ time, so we’ll get that all done and dusted. I’ll get it over with and get started on this recovery journey.

“I was keen for supercross more than anyone else I think – I was getting my track rebuilt this week and supposed to be testing with the team next week. I was eager to get into, but things happen for a reason. I’ll get fit and healthy – there are plenty more supercross seasons’ to come.”

Mellross, who devastatingly lost the SX2 title in 2015 following a mechanical failure at the final round, is well aware that anything can happen in motocross, and his approaching the weekend with a great sense of optimism.

“Right now, my social media consists of just Clout versus Waters for the championship,” he added. “I think it’s quite bizarre – I mean I have had quite a serious knee injury, but to rule someone out when they’re only 14 points out is hard. It’s not ideal, but in motorcycle racing, it’s not always the fastest guy that wins – I’ve been on the receiving end of that.

“In 2015 supercross, I was leading the points, a part broke in my bike at the last round and I lost the championship. I’m definitely going in with the attitude that anything can happen, and I’m going in optimistic.” 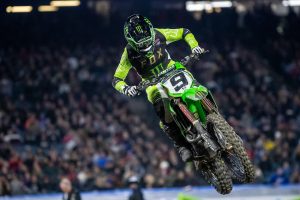