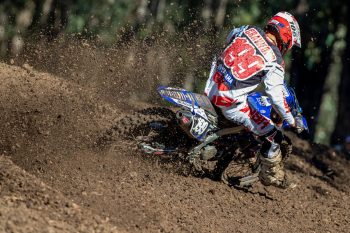 A season-first moto victory at Maitland’s Pirelli MX Nationals has come as a relief for Serco Yamaha’s Nathan Crawford, the popular Queenslander surging into form throughout the second half of the championship.

Crawford suffered a leg injury in the later months of last year which required a lengthy recovery that extended to just weeks out of the MX Nationals opener, resulting in the number 199 experiencing a slow start to the year.

He bounced back at Gympie following the break, showing glimpses of the speed he’s become known for, although he finally put it all together in New South Wales yesterday, claiming victory in moto one before putting on an incredible charge in the final encounter for second, granting him P2 overall despite equalling points for first.

“It’s so good to be back and racing properly again,” Crawford explained. “That first race win was so good and the I had to work hard for it and all the good riders in the race were up the front and I was able to get past them.

“Coming up the final straight to the finish line was such a relief to finally win a race again at this level and get a reward for the work everyone has put in. Race two was just a little too little, too late. I charged up to Kyle [Webster], but he responded and rode the last two laps really well. He deserved to win it as I gave it all that I could and wasn’t able to pass him.

“Thanks to so many people for standing by my while I got back to speed and now I’m so motivated to be back in the game and doing well and what I love.”

Ranked a distant fourth in the standings, Crawford’s return to form in the final rounds could serve as an interesting factor in the tightening MX2 championship race, which currently sees the top three separated by 20 points.