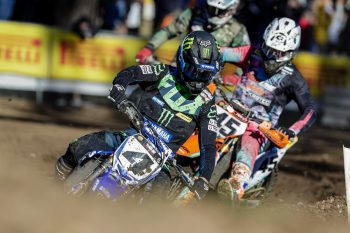 Brett Metcalfe (Penrite Honda Racing) stormed to the hole-shot in the final MX2 encounter before being quickly overcome by American Justin Rodbell (KSF Suzuki), who controlled the field during the early stages. Kirk Gibbs (CDR Yamaha Monster Energy) made a selection of crafty manoeuvres, stealing the lead before going onto win the moto.

Behind him, Metcalfe relegated himself down the field with a mistake as Clout pressed forward, chasing after his teammate before ultimately accepting second. Raceline KTM Thor’s Hayden Mellross put in a strong ride for third, followed by Todd Waters (DPH Motorsport Husqvarna) and privateer Jesse Dobson (Husqvarna). In MX2 moto two, reigning champion and points leader Wilson Todd (DPH Motorsport Husqvarna) grabbed the hole-shot while leading rival Webster, although the number one plated rider made a rare crash on lap one, allowing Webster to inherit the lead as he dropped to almost outside of the top 10.

Webster continued to charge out front, bridging a comfortable gap, however that was later shortened by race one winner Nathan Crawford (Serco Yamaha), who put in an incredible ride during the final stages, working his way to within striking distance of Webster.

Webster claimed the overall win, equalling on points with Crawford and credited the win on countback, while Wilson rounded out the podium in third. Todd continues to lead the championship standings. 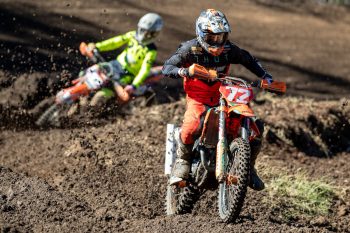 Western Australian Regan Duffy (Raceline KTM Thor) continued his dominance in the MXD category, backing up his race one this morning with a commanding moto victory in the final outing.

The Yamaha YZ65 Cup was taken out by Nate Thompson ahead of race two winner Kayd Kingsford and Toby Huston. The MX Nationals now heads to Moree in New South Wales on 28 July for round eight of the series. 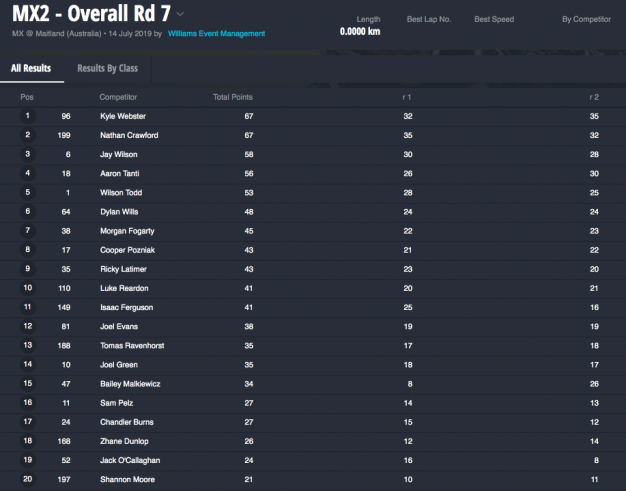