Ward acknowledges results turnaround a must for 2020 support 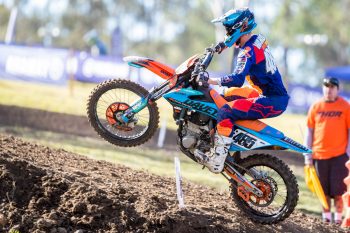 Following a hand injury that hindered his campaign for the first six months of 2019, Caleb Ward has acknowledged the importance of recording strong results in the remaining rounds of the Pirelli MX Nationals if he wants to secure adequate support for next season.

The talented Queenslander suffered the injury while racing in New Zealand in January, although the injury plagued him throughout the opening rounds of the MX Nationals, ultimately forcing him to sit out the Broadford and Murray Bridge rounds in the opening half of the season.

“Obviously I’ve been out for most of the year, so for me, I really need to try and get some good results, show everyone what I can do and show everyone that I’m still fast,” Ward told MotoOnline.com.au. “I need to run up front and show people I’m deserving of a ride and support for next year.

“If I don’t do good in these next few races, it’s going to very hard to get support for next year – I know this because at the end of last year I put in a few good results, and I still really struggled to get heaps of support.

“I have a heap of great people helping me out this year, but obviously the better you do, the more help you get. I’ve been working really hard, so hopefully I can show everyone what I can do.”

With just three rounds under his belt, Ward is ranked 25th in the MX1 championship standings.