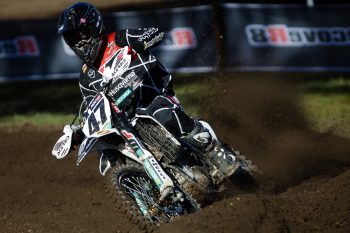 The DPH Motorsport Husqvarna ace believes targeting victories in the final four rounds of the series will lead him to a maiden premier class crown, rather than focus on managing the slim three-point advantage he holds over Luke Clout (CDR Yamaha Monster Energy).

The red-plate has donned the bikes of Clout and Hayden Mellross (Raceline KTM Thor) this season, while Waters holds it for a second time currently. It’s a three-rider chase for the title, as just five points separate the trio.

“It’s not really my focus [on the red plate],” Waters explained to MotoOnline.com.au following his Gympie victory. “I just want to win races, and that’s my main focus for the last half of the championship. I just want to keep that ball rolling – I’ve been training hard and I expect to get wins.

“The points lead doesn’t bother me – I had it at the start of the year and I lost it, so anything can happen. For me, I just focus on the race – I don’t really give a rats about the championship at this second. As long as I’m winning races, it will be bring the championship.”

The popular Queenslander has captured five moto wins and three overall victories this season, with a DNF at Wonthaggi’s second being the number 47’s only blemish.