The 2019 Hattah Desert Race will long be remembered for the torrential rain that caused havoc on race-day Sunday and, in the end, it was KTM Enduro Racing Team’s Daniel Milner who delivered a phenomenal victory. Armed with the thundering 500 EXC-F, Milner won his second Hattah outright as the race was declared four laps in at the halfway point. Incredibly, Milner won despite a recently-broken collarbone and a case of tendonitis, making his achievement all the more remarkable. MotoOnline.com.au tracked him down post-race to reflect on the wild ride that it was. 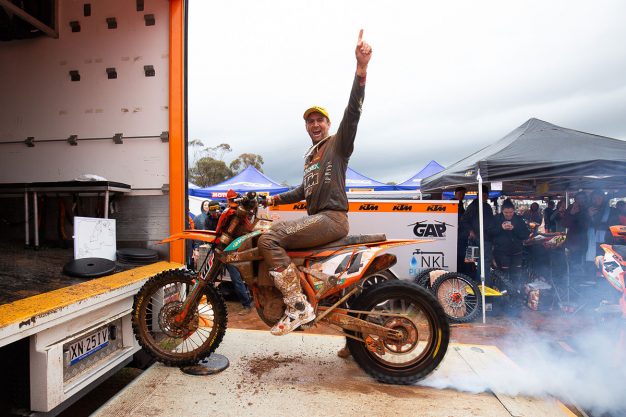 Congratulations on an excellent result in tough conditions, you must be really satisfied with this one…

Yeah, for sure! Especially with the lead-up that I’d had, it’s been a massive struggle I guess you could say. I broke my collarbone six weeks ago and had to get that repaired, then once I got back on the bike I had tendon problems in my opposite arm. It was one extreme to the next, so we only had four days on the bike and one day of testing – to bring it home is an unbelievable feeling.

What were the expectations going in then, considering your injury in the lead-up?

Honestly, as a racer, you always want to win. That was my main goal, but I knew that it was going to be hard against ‘Chucky’ [Daniel Sanders], who has done so much sand riding and had been getting prepared for this event. My fitness probably isn’t at where it needs to be – my bike fitness, anyway – so I was kind of worrying a little bit. I was always just going to lay it all on the line, put 110 per cent in and see where we were at during the race.

In the end, reflecting on the weekend, a couple of things went your way in the race, but you were fastest in qualifying and then ultimately won it. It all paid off…

Yeah, that’s exactly right. I was in exactly the same position last year as Chucky was this year with a bit of bad luck and a little problem, so I mean, it happens to everyone and it’s not the way I wanted to win it. We were still close when his issue happened, so it definitely wasn’t the end of the race and we were giving it everything we could! Unfortunately, that happened, but luckily enough our bike was spot on and didn’t miss a beat. That 500 EXC-F in desert trim is a pretty awesome bike, isn’t it!

[Laughs] yeah, for sure! It’s a weapon. That’s the best thing about it because in the lead-up we didn’t have time to do much testing, so it was pretty much the bike I rode last year with an identical set-up. We went a little bit firmer than what we have in previous Hattahs, but in the conditions it didn’t really matter. It was a pretty insane race with how muddy it was, how deep some of the ruts were and, I think, it was on the second or third lap that I got stuck in a rut and actually had to lift my bike out. I lost a fair bit of time there to Chucky, so that was a bit of a problem, but once we got back into it we were making sure we could just get through it.

Is it just a matter of staying focused and remaining composed in that sort of race in those conditions?

That’s it. Being that type of race, it’s all about survival and that was my goal, to make sure my laps were consistent and that we kept ticking them off. I think it was a smart move to cut it short because the risk factor was high, plus there were a lot of guys getting off the track and making their own lines, so there were short-cuts going on, that’s for sure. The fact that you couldn’t get emergency vehicles out to a lot of spots because it was that boggy and crazy… I think at one point I counted four or five ambulances on the side of the track, darting their way through the sand and obviously trying to get to people. It was a very sketchy race with that much water that you couldn’t even see the mud holes and I think that’s why they called it. It was the right decision.

What was the story with the collarbone, anyway? We hadn’t heard anything prior to the race weekend.

In America when I went over to do the GNCCs, we did one weekend and then I pretty much had a get-off the following week. I came up short on a jump and just drove my shoulder into the ground and broke it. I kind of kept it a little bit quiet in the lead-up to Hattah, I guess you could say because I didn’t want my competitors knowing what was going on. I just wanted to get through it, so as soon as it happened I got onto my physio, Jon Park, and he organised an operation straight away. I came home, got the operation and sat on the couch for three weeks, then jumped back on the bike. I went from there to getting tendonitis in my other arm, so it was definitely the worst lead-up I could possible have heading into this race, so I’m absolutely stoked I could pull it off and get the win.