Third Pro Motocross overall of the season for Tomac at RedBud

Clean-sweep for Ferrandis in 250MX as Lawrence delivers top-five result. 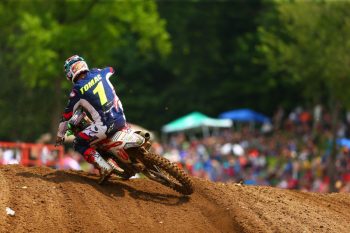 It was Tomac who made his way to the front for the opening moto win ahead of Anderson and Cooper Webb (Red Bull KTM Factory Racing), before Musquin topped moto two over Tomac and opening half leader Ken Roczen (Team Honda HRC).

While Tomac, Anderson and Musquin filled the podium placings, it was supercross champion Webb who scored fourth and Roczen put forward a positive performance in fifth for this weekend.

The winning effort allowed Tomac to extend his lead in the 450 Class championship standings to 34 points over Musquin, while Roczen maintains hold of third.

Rockstar Energy Husqvarna’s Zach Osborne was unable to compete due to a shoulder injury sustained in the morning’s practice, dropping him from fourth to sixth.

In the 250 Class, Monster Energy Star Yamaha’s Dylan Ferrandis captured his third career win with a dominant performance by sweeping both motos.

It was another good day for Australian Hunter Lawrence (Geico Honda) in fifth overall, directly behind teammate RJ Hampshire. Lawrence was eighth in the opening encounter and then improved to fourth later in the afternoon.

Cianciarulo continues to lead the 250MX standings with a 25-point advantage, while Ferrandis’ 1-1 performance helped him overtake his teammate Cooper by a single point for second position.

The 2019 Lucas Oil Pro Motocross Championship will take a weekend break before resuming on Saturday, 20 July, from Spring Creek Raceway.