Milner out, Higlett in for Team Australia’s ISDE squad

Revisions to the World Trophy team confirmed by Motorcycling Australia. 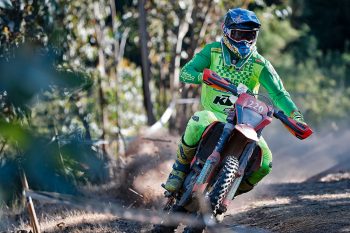 Last year’s International Six Days Enduro (ISDE) winner Daniel Milner has been ruled out of the 2019 edition to be staged in Portugal this November, opening a position for Husqvarna’s Fraser Higlett in the defending champion World Trophy team.

KTM Enduro Racing Team rider Milner is expecting the birth of his first-born child in October, causing him to opt out of the Recover8-backed ISDE effort after a remarkable result in Chile last season.

“My fiance and I are super-excited to announce that we are expecting baby Milner in October,” Milner announced. “We can’t wait for parenthood and what the rest of this year has to bring! Unfortunately, my commitments to my family mean I have withdrawn from the RecoveR8 Australian ISDE team. Sadly, I will be unable to defend my individual and team titles.

“Since 2011 when I was first chosen to represent my country I have not missed one ISDE, so as hard as this is, I know I will be more than pre-occupied with a different type of milestone in my life. I wish all the boys and girls riding the best of luck and hope to see team Australia back up on the podium in November.”

“This has been unexpected, but a super-positive surprise!” commented Higlett. “I’m really honoured to be returning to the ISDE for a second year and representing my country. 2018 marked my first year in the team and I learnt a lot, which I’ll take into Portugal to help defend our title.”