Racer comments from the sixth round of the MX Nationals.

A selection of riders detail the round six of the 2019 Pirelli MX Nationals at Gympie in Queensland. Team and privateer competitors can submit comments to [email protected] by Monday afternoon after events for inclusion in the post-event Quotebook feature. Kirk Gibbs (CDR Yamaha Monster Energy) – Second overall:
It was good to get things back on track and finish up with a good result here. More importantly, the way I rode was what mattered and to be able to pass all the guys at the head of the championship and take the moto win means more to me than finishing on the podium for the day. I just need to focus on the way I ride and doing my best laps and the results will continue to flow for the rest of the season. Thanks to the CDR Yamaha Monster Energy Team who always put in 100 percent and its nice to reward everyone on the team and our supporters a podium this weekend.

Luke Clout (CDR Yamaha Monster Energy) – Fifth overall:
It wasn’t a great day and I didn’t ride my best, but I was able to salvage what I could and I’m still only three points from the lead in the championship. There are only five points between three of us in the championship and now it comes down to not making any mistakes and keep putting myself in good position to win races and rounds. Next round is at Maitland, a track that I have raced at a few times and enjoy riding so I will put this one behind me, focus forward for the next round and get things back on track there.

Jesse Dobson (Husqvarna) – Sixth overall:
I’m really happy to get back to the form I expect after Murray Bridge. I know that I have the speed, and the FC 450 is an awesome bike right out of the box, so to take out Superpole was a great start to the day. I spent some time testing suspension with Paul Baericke, and I’ve been riding with Nathan Crawford a lot in the break, and it’s really helped me take another step forward. I didn’t get the starts I needed, especially in the second moto but I felt really good on track, and although it got more technical as the day went on, I was able to move forward in both races. The guys at MX Farm have done a great job, and the track is only going to get better there, so thanks to WEM for getting us to such a great venue, and thanks to the crew at MPE Husqvarna, I’ll switch over to a brand new FC 450 for the final four rounds of the year!

Richie Evans (Yamalube Yamaha Racing) – Ninth overall:
I just felt a bit off all day today, both with my bike and the track. My starts were a bit off, I didn’t link the turns up as I would have liked and probably needed to make some changes to my bike to handle the conditions better. My goal is top keep improving at every round so I will head home and keep working on things and ensure I’m ready to go for round seven in three weeks’ time.

Lawson Bopping (Empire Kawasaki) – 21st overall:
It was a tough one here today, but the track was pretty cool. The first race was hard – I got a bad start and I don’t really know what to say about that one. It ended in a DNF, which was disappointing, but we lined back up for the second race and I got a pretty good start. I was able to run toward the front for a number of laps, but then I had to ride it home in the race’s last half. I’ve got some issues with my health going on, which are definitely holding me back. I’m enjoying it so much though, the KX450 is such a good bike to ride and I’m thankful for everybody in the team’s support.

Dylan Long (Empire Kawasaki) – 10th overall:
We made some changes after practice and qualifying because we tried a set of suspension that was pretty fresh, so that showed in my times. I came out in the first race and nearly hole-shotted, then fell about three corners into it. I came from last to 14th, but I was spent. In moto two I got another good start, which was awesome, and I can’t say enough about the KX450. I had used all of my energy in that first race, but we finished sixth in that one and it was decent. After missing the start of the season we’re still getting going, so I think I can be very, very competitive.

Brett Metcalfe (Penrite Honda Racing) – Third overall:
I am so happy for everyone on the team. Everyone has been working hard and it paid off this weekend, it feels great to be back up there. It’s always reassuring when you get a good start and build a solid momentum as the day goes on. The break between rounds five and six has allowed my injury to heal so I am riding back to my potential. I battled back from a mediocre start and once I caught the lead group, it was tight and track condition made it difficult to pass anyone, the dust was intense so ultimately I took fourth. We have a couple of weeks to find some more pace and work on setup. I just want to win, simple as that and I can’t wait for round seven in Maitland. 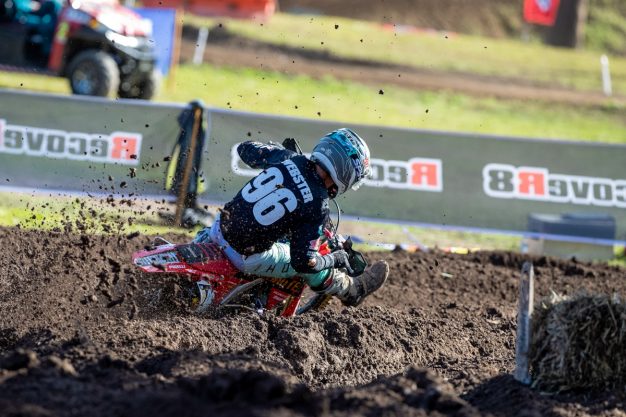 Jay Wilson (Yamalube Yamaha Racing) – First overall:
Wow, its just amazing how things work out. After the first two motos where I was over riding and crashing, I went into race three just looking to ride well and post a result I could be proud of. Winning the round was the last thing on my mind. I didn’t get a great start but made some passes early and managed to hit the lead. I just put down the best laps I could and managed to build a five second lead. It wasn’t until two laps to go that I saw my pitboard that had 1st = 1st that the overall become possible. It was my first moto win of the year. I was a bit fortunate to get the overall win, but I will take it and it just goes to show that you have to keep on plugging away, never give up, and anything can happen. Thanks to my team and my family for another massive effort and we can now look forward to the next round and keep the podium streak going.

Kyle Webster (Penrite Pirelli CRF Honda Racing) – Fifth overall:
Having had a great mid season break with excellent results at Manjimup and the NSW MX titles I was really keen to get back to the nats. But I never really settled into the track at Gympie on the day and just had to make the most of it. I tried to find my mojo by moto three, and was happy to be able to keep second place in the championship standings. The next round will be important and I will be pushing hard to stay up the front.

Nathan Crawford (Serco Yamaha) – Third overall:
Since round five, I have changed a lot of things, both with the bike and my training and it was good to get a reward for it here at round six. The Serco Yamaha team have worked hard over the break and the guys did everything they could to get my back on track. It just felt good to be back in the battle again, racing at the front of the field and challenging for podiums. I loved racing today and enjoyed the battle with the guys. I didn’t win, but I walk away from here knowing that I can still challenge for race wins and that I gave it my all. It’s the first time in a long while that I have left an MX Nationals event satisfied and happy. I can’t wait to go racing at Maitland.

Aaron Tanti (Serco Yamaha) – Fourth overall:
So close but so far. There wasn’t much separating the top five guys on the track and it was matter of tenths of a second between us on most laps. All of us made a mistake in a race and to have five riders finish a point apart is pretty hectic. My riding is good and I’m right where I need to be. The next race is down in the Hunter Valley and I look forward to mixing it up again there with these guys.