Geico Honda ace records 8-4 scorecard at the fifth round of Pro Motocross. 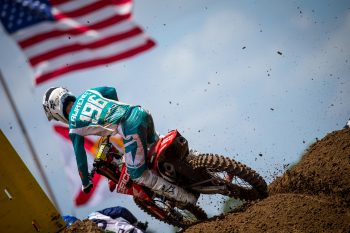 Australian fan-favourite Hunter Lawrence salvaged a top five finish at WW Ranch Motocross Park’s fifth round of the 2019 Lucas Oil AMA Pro Motocross Championship, describing it as the most physically demanding circuit on the calendar so far this season.

Coming off a career-first moto win and overall podium the weekend prior, Lawrence charged to an 8-4 scorecard at the Florida facility for fifth overall.

“Tough weekend in the heat at WW Ranch, first moto was difficult with a bad start,” Lawrence explained. “Coming through the pack back to eighth was a really tough ride, I had to push so hard through the field, and that took some energy. Second moto was a top 10 start or so, and I fought my way up into fourth behind Cianciarulo.

“I couldn’t quite get him. The whole day was super hot and tough, it was my first hot race in maybe close to a year. I had to really dig deep, track was very physically demanding on top of all that with seven sets of rollers on the track, plus the bumps and wall jumps.

“It was tough! The big jumps were good to breathe and regroup but I think it was the most physically demanding track we’ve had this season. Fifth overall is okay for now.”

The Geico Honda rider is positioned seventh in the championship standings as the series resumes this weekend at Southwick.