Suspected lower back and shoulder injuries for the Australian. 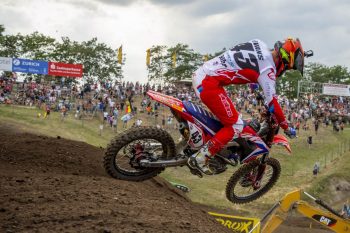 Finishing third in the qualification race, Mitch Evans saw a promising weekend at Teutschenthal in Germany cut short after sustaining multiple suspected injuries in a heavy race one fall.

The MX2 World Championship contender was holding down a front-running pace in the opening encounter, however crashed harshly into the face of a jump, prompting him to exit the outing and not return for race two.

Team Honda 114 Motorsports has indicated Evans has likely sustained lower back and shoulder injuries, although further details on the extent of the injuries are still be confirmed.

“We’re sorry to see that Mitch Evans hurt himself in race one,” said Honda Europe off-road manager Gordon Crockard. “Crashing on the upslope of a take-off jump can often mean a hard impact. He has suspected lower back and shoulder injuries and we wish him a speedy recovery.”

It’s a bitter blow for the Australian in his rookie season, displaying strong form in the opening half of the championship. The double DNF sees him positioned seventh in the points rankings.