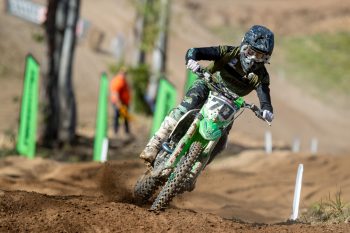 Empire Kawasaki’s Lawson Bopping suspects the mystery illness that saw him step away from racing motocross for a number years is reemerging after battling unexplained fatigue at Gympie’s Pirelli MX Nationals yesterday.

Bopping was forced out of racing motocross in 2016 with the undiagnosed illness, which continued to plague him throughout following years and in various supercross campaigns.

Receiving the call up to initially fill-in for Dylan Long at the Kawasaki squad earlier this year, Bopping’s well-being appeared to be on the rise, however his recent increased effort to ride out the remainder of the nationals has been met with a decline in health.

The number 70 encountered such fatigue in the opening outing at Gympie that he was forced to withdraw, while in race two, he mustered up a P12 finish for 21st overall.

“I hate to make excuses and it sounds like I make excuses for why my results aren’t real good, but I’ve been riding and racing the last couple of months, and the last few races I’ve done locally I’ve been pretty tired after the races – more tired than what I probably should be,” Bopping explained to MotoOnline.com.au.

“There’s an issue definitely going on – the more I do at home, it’s almost like the worst I end up – which is hard in this game, because you have to practice to get better. Maybe I’ll be back on the couch and just race – it doesn’t make sense to me.

“I’m just not fit enough – not as in [athletic] fit – but like there’s an illness. I’m getting tired when I shouldn’t be getting tired, and this sport is super tough – it’s all out and you need to be strong the whole way through. There’s a lot to think about and it’s a very tricky situation that I’m in.”

Ranked 11th in the championship standings, Bopping’s best result so far this season has come at his first appearance at Wonthaggi, where he wound up fifth overall.