Musquin breaks through in Pro Motocross at WW Ranch In moto one Musquin was dominant to his first moto win since the 10th round at Unadilla last August, crossing the line 7.7 seconds ahead of Ken Roczen (Team Honda HRC), with Jason Anderson (Rockstar Energy Husqvarna Factory Racing) right behind in third.

No doubt disappointed in his first moto effort, Tomac seized the moment to start moto two and took his first holeshot of the season. With a clear track ahead of him Tomac sprinted in the opening stages in an effort to build a margin that he could manage as the moto continued.

Anderson applied pressure on Osborne and made an impressive pass to take over second. Osborne attempted to fight back, but to no avail. Tomac needed just over a lap to storm out to nearly a five-second lead, which left everyone else to battle for the remaining spots on the podium.

Anderson gave chase from second, while Osborne was left to deal with Musquin for third. The rookie held off his training partner for a while, but the Frenchman utilised alternate lines to make the pass and move into third.

However, the big-picture battle in the championship changed after Roczen went down while running fifth. Roczen and Tomac entered the race tied atop the point standings, but Roczen began the second moto with the upper-hand. He remounted in seventh, but continued to lose positions and ultimately took 10th.

Tomac managed a perfect moto to take his fifth chequered flag of the season, 4.1 seconds ahead of Osborne, while Musquin held on for third and Australia’s Dean Ferris (Monster Energy Yamaha) went 10-7 for eighth overall. It’s Tomac who holds a six-point lead in the 450 Class standings over Roczen.

Monster Energy/Star/Yamaha Racing’s Justin Cooper emerged to take the first professional win of his career in the 250 Class, going 2-2 for the overall ahead of teammate Dylan Ferrandis and championship leader Adam Cianciarulo (Monster Energy/Pro Circuit/Kawasaki).

Geico Honda’s Chase Sexton won the opening moto, however, he pulled off into the mechanics area and eventually retired from the race later in the afternoon, ending his hopes of a first career win. Australian teammate Hunter Lawrence took fifth overall via 3-5 scores.

Despite seeing his win streak come to an end, Cianciarulo still has a firm hold on the championship point lead, where he sits 18 points ahead of Cooper. Ferrandis is third, 35 points out of the lead.

The 2019 Lucas Oil Pro Motocross Championship will reach its halfway point next Saturday, 29 June, with the Southwick national in Massachusetts. 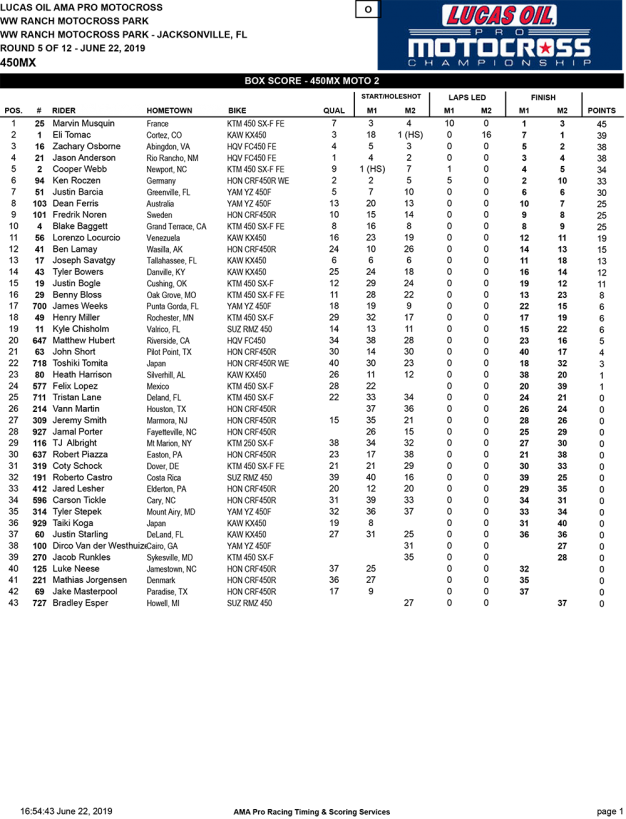