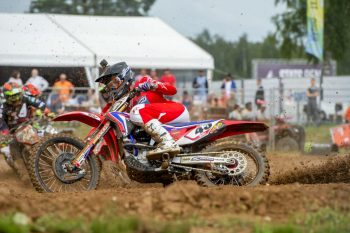 A crash during timed practice on Saturday at the MXGP of Latvia ultimately set the tone for the remainder of the weekend for Mitch Evans, as he endured one his toughest rounds of the series.

The Queenslander was nursing an injured shoulder sustained in the practice crash, prompting him to sit out the qualification later on Saturday.

The Team Honda 114 Motorsports rider charged to an impressive ninth in the opening encounter on Sunday, however he suffered yet another heavy fall in the final outing, mustering up a P22 result for 15th overall.

“It was a tough day today,” Evans admitted. “I had a decent start in race one from a pretty poor gate choice and made my way forward into ninth place. After my time practice crash I didn’t really gel with the track and struggled to find my flow but I was quite happy with race one.

“I didn’t get a great start in race two and was battling through the pack and then had a pretty big crash again. Then after the crash I was riding in fear of crashing again. It was a tough race and a tough weekend. I’ll rest up this week and come back swinging in Teutschenthal.”

Evans is ranked seventh in the championship standings as the series resumes this weekend at Teutschenthal in Germany.