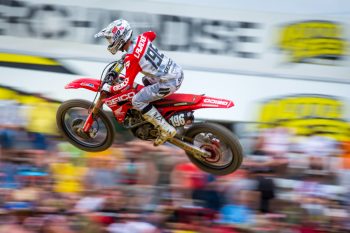 The youthful Australian put on a stellar display of riding during Saturday’s event, making a number of passes while storming to victory in the opening encounter.

He returned for race two with eyes on the number one spot once again, although a lacklustre start saw him forced to work his way through the front of the field, mustering up a P3 finish for runner-up honours.

“I was pumped on that, had an awesome start and made two passes in the same spot to get the lead,” Lawrence commented. “I was smiling, but the last three laps were so hard, everything and anything runs through your mind. I think it’s unhuman if you don’t—it’s the first time, I’m so stoked, you think of the team, you think of everything.

“I spent maybe three seconds a lap thinking about all of that stuff, but then you have to focus back on the job. Second moto, believe me, I was wanting to win it, but the start wasn’t as stellar as the first one, and I took too long to get around Colt [Nichols]. Would have loved to have won the overall, but the moto win is a huge step for me so I’ll take it.”

The Geico Honda contender is now ranked seventh in the championship standings after previously holding down ninth. Pro Motocross returns this weekend at WW Ranch Motocross Park in Florida.