Beaton pushes through illness in MXGP of Latvia top 10 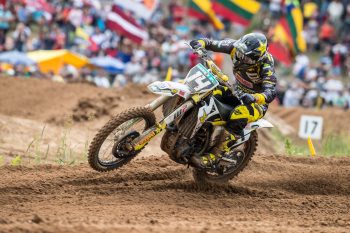 Former Australian MX2 champion Jed Beaton pushed through illness at yesterday’s ninth round of the 2019 MX2 World Championship in Latvia, salvaging a top 10 overall placing in an admittedly tough weekend.

The Rockstar Energy Husqvarna Factory Racing rider said he did all he could in the pair of motos, ultimately lodging a 10-13 results sheet for 10th overall.

The Tasmanian, who missed the season-opener with injury and has since played catch up in the following rounds, is ranked 13th in the championship standings.

“It’s been a really tough GP for me, but I’m pleased I came away with points in both motos,” said Beaton. “I got sick with the flu on Thursday before the race and I really struggled with a fever and low energy. I worked hard during the qualification race and did all that I could during today’s motos.”

The world championship now heads to Teutschenthal in Germany, which marks the end of a three-week stint with consecutive rounds.