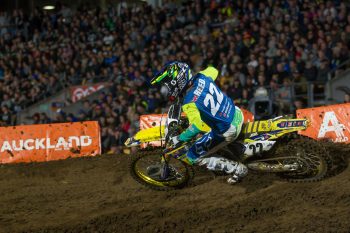 “It’s important to retain your championship, and this year to win the second FIM Oceania Championship would be a huge honour,” said Australian fan-favourite Reed. “I think we’ll have a much better preparation and be able to come out swinging in New Zealand.

“Fans in Auckland last year were unbelievable, despite the challenging conditions of the weather, I had such a great time, and the supercross was amazing, you couldn’t have asked for a better night of racing.”

Anderson added: “I’m super excited to be heading to the S-X Open Auckland, it will be my first time to New Zealand, I saw it last year and it seemed like a really epic event.

“I only get to choose a select few events to race at in the off season, so heading to Auckland will keep my off season interesting, and to win the FIM Oceania Supercross crown would be sweet, it would be another one to add to the trophy case, it’s one I don’t have and look forward to putting it up there.

“Competing against Reedy, I know he is a tough competitor, no matter how old he gets he’s always fighting and he’s always gnarly, and he definitely won’t make it easy on me, and I know it’s going to be a good battle and a fun race.”

Confirmation of the New Zealand venue hosting round four of Australian supercross leaves just rounds one and two to be revealed, with Wollongong’s round three and season-finale Melbourne already announced.

A crowd of over 22,500 attended Auckland’s Mount Smart Stadium in 2018 for the S-X Open, making it the biggest international supercross event to ever take place on Kiwi soil and ultimately putting the country on the world supercross map.