KTM recently hosted it’s 2020 EXC-F and EXC international media launch in Bassella, Spain, where the new generation enduro models were showcased for the very first time. MotoOnline.com.au had the opportunity to sample the entire range, including the 2020 KTM 250 EXC-F. Where we rode:
The media launch took place at Bassella Experiences, about two and half east of Barcelona in Spain. The venue is a dedicated off-road park, and a unique 12km enduro loop, including a special test, was put together for the international press to put the bikes to the test. The trail offered varying surfaces and obstacles, including challenging rock sections, steep ascents and descents, tight and technical trail, plus fast and flowing trails. 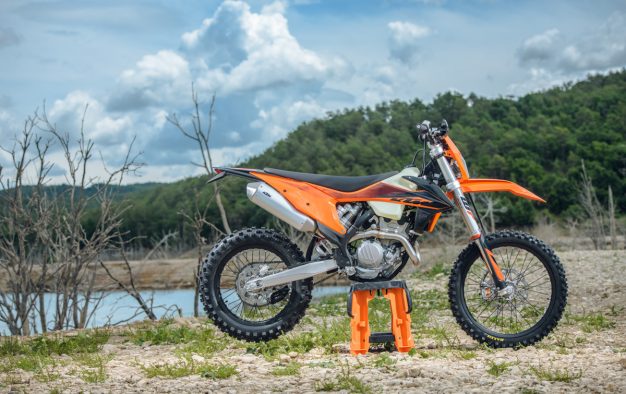 Technical features:
For year model 2020, the entire EXC-F and EXC range has undergone a major overhaul, with the new generation 250 EXC-F delivering a host of enhancements and refinements over its predecessor. KTM’s target for its 2020 range of enduro bikes was to make them more rideable, which is the result of significantly developing the chassis, suspension and engine package. The latest incarnation of the 250 EXC-F offers an engine that is more efficient and produces greater power, the chassis has increaased stiffness, the cooling system has been refined and the exhaust system is completely new to compliment the engine and electronics updates. All-new bodywork graces the quarter-litre machine, however there’s more to it than just aesthetics – the panels have been intelligently designed to maintain strength while cutting down weight, while they’ve been reworked to slim the bike down, particularly on the exhaust number plate, which is now symmetrical with the left-hand side. The airbox has also undergone a makeover to improve airflow, and despite the adjustments, it still utilises the same air filter as its predecessor. As always, the KTM is fitted with only best componentry, including WP XPLOR suspension, Brembo brakes – which are clear standout – hydraulic clutch, Giant rims, Neken handlebars and electric starter. 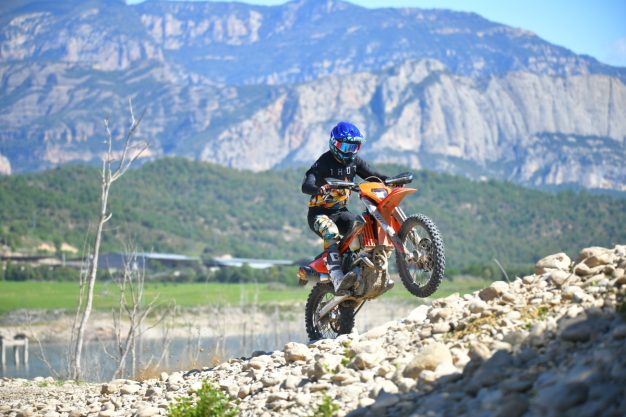 Chassis feedback:
The 2020 KTM 250 EXC-F chassis has undergone significant development to emphasise the rideability goal of KTM, however, it still retains the same geometry as it’s predecessor after zero complaints from riders. The difference? Stiffness levels have been increased in key areas of the frame, offering a ride that’s more playful and stable than the previous generation. With the 250 being the small-bore machine in the EXC-F range, the key characteristics can really be felt as you push the bike’s power to the limits. Throughout the trails it felt nimble and confidence inspiring to take on obstacles, and in faster, wide-open terrain, it offered reassuring stability. All-new for 2020 is the WP XPLOR fork and WP XPLOR shock. The fork is 48 mm diameter, and is a split fork design developed by WP and KTM. While each side is fitted with springs, they have separate damping functions – compression damping is on the left and the rebound on the right. At 75kg and intermediate skill level, the fork felt a little stiff in standard trim, although in saying that, I didn’t alter the clickers at all. You can really feel the potential with the fork, and I think additional time on the bike with some fine tuning would be all that’s needed to settle on a comfortable setting. The shock utilises KTM’s PDS (progressive damping system) design, unlike its motocross siblings – this is where the shock is directly linked to the swingarm without an additional linkage system, reducing weight and lowering the chances of hooking on rocks. The WP XPLOR shock offered a comforting feeling in standard trim, once again, I didn’t adjust the clickers. Straight off the bat, the bike tracked exceptionally well, particularly in the rougher and rockier sections of the trail, and provided plenty of confidence to push the limits further. The suspension package really compliments the reworked frame, and I felt comfortable and confident in just matter of minutes. 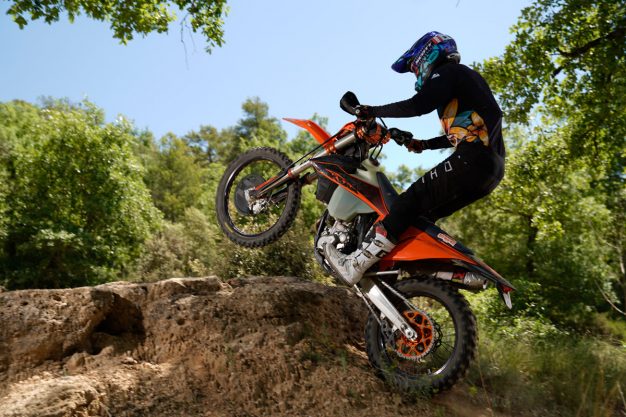 Motor characteristics:
The KTM 250 EXC-F’s powerplant is one of – if not – the most powerful engine on the market, and that’s a significant boost in the quarter-litre category. For 2020, it has two new overhead camshafts which activate the titanium valves via super-light DLC coated finger followers, while the cam shaft timings have been optimised to further enhance engine performance. The crankshaft is located in an ideal position close to the centre of gravity, contributing to easier handling. It utilises a short connecting rod, which makes for an overall compact and lightweight engine with a snappy power delivery. The power delivery is strong and punchy, and it offers a surprising amount of torque right throughout the rev range. You can really maximise the power of the 250 and use all it has to offer, making it an incredibly enjoyable bike to ride. The ECU features new maps for 2020 adapted to the new exhaust, airbox and engine configuration, and it regulates the unique traction control feature as well as the smooth and aggressive maps. Much like the 350, I opted for the aggressive map, which really suits the 250’s power – by flicking to aggressive map, it made the bike pull harder and allowed it be revved out for longer. 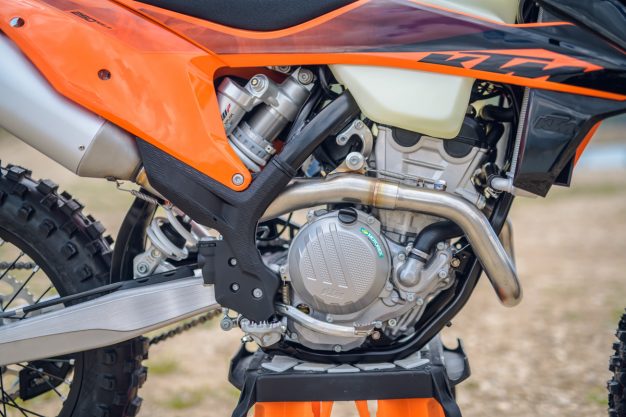 Final thoughts:
The 2020 KTM 250 EXC-F is as KTM says, Ready to Race. The bike is fitted with a premium range of componentry, and the engine, suspension and chassis work together to make for an exceptional package. The engine particularly is powerful, and the ability to use all that’s on offer and push it to its limits creates an enjoyable riding experience that differs from its big-bore counterparts. If I was racing enduro, this would be my weapon of choice. 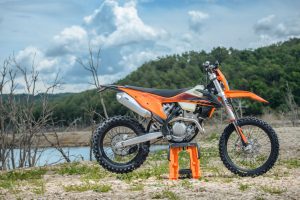 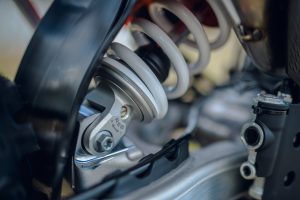 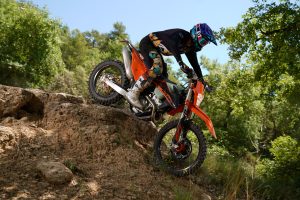 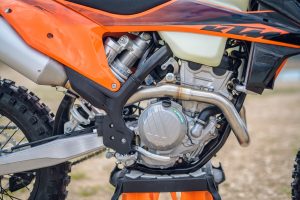 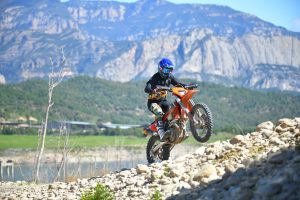 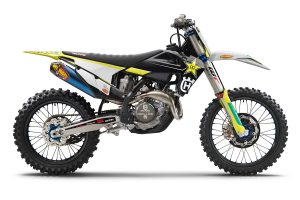 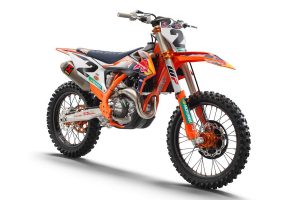 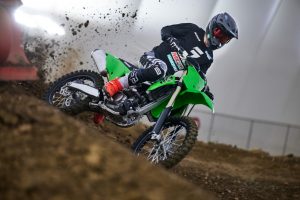