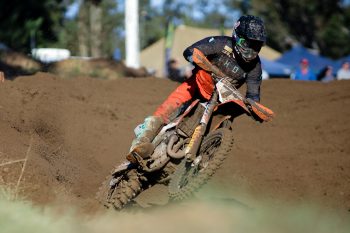 Raceline KTM Thor’s Regan Duffy has become the youngest-ever rider to win the prestigious Manjimup 15,000 at 16 years of age, capturing a stunning victory on Sunday in Western Australia.

The youthful Western Australian, who currently leads the MXD category in the MX Nationals and stepped up to a 450 for the event, opened proceedings with a stellar victory in race one, backing it up with second in moto two before a heroic last-to-first performance in race three for third granted him top honours.

The thrilling final encounter saw the 15,000 crown come down to the wire, with race one and two winner Kirk Gibbs (CDR Yamaha Monster Energy) ultimately falling short of a record-matching fourth Manjimup 15,000 victory by just a singular point.

CDR Yamaha Monster Energy’s Luke Clout, who registered a non-finish in race two, made amends in the shoutout, stealing victory from Webster and Mellross in the final three showdown.

The MX2 category was taken out by Corben Weinert (Yamaha) ahead of Conan Forrester (Yamaha) and Rhys Burnett (Yamaha), while the final round of the Australian Women’s Motocross Championship saw Meghan Rutledge (Kawasaki) crowned champion, while for the round it was Jess Moore (KTM) taking top honours over Rutledge and Maddy Brown (Yamaha).