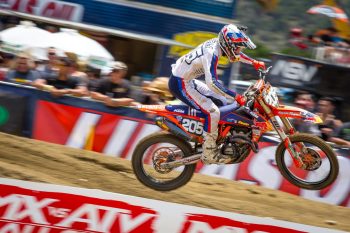 Queenslander Wilson Todd has indicated his guest ride with TLD Red Bull KTM has been extended for this weekend’s third round of the Lucas Oil AMA Pro Motocross Championship at Thunder Valley.

The Australian MX2 champion initially scored the ride after making an impressive debut at Hangtown aboard a borrowed bike from Troy Lee’s son, Max Lee, ultimately being called up by the factory-backed squad to fill in for injured team regular Mitchell Falk at Fox Raceway.

His campaign last weekend was marred by a frightening first turn crash in moto one, forcing him to return to the mechanics area while battered and bruised to repair his 250 SX-F, rejoining the circuit to earn a P29 result. He rebounded with a spirited showing in race two, securing 14th for 19th overall.

When contacted today, Todd confirmed he’ll be on the gate with the TLD Red Bull KTM team this weekend, with the possibility of racing High Point’s fourth round the following weekend should he perform well on Saturday.

Todd, who currently leads the MX2 category in the Pirelli MX Nationals, intended to race just the first two rounds of the series as a privateer before returning home.