Eight major upgrades in the new generation of 2020 KTM EXCs.

Year model 2020 marks a new generation for KTM’s highly-popular EXC range, with the entire offering of two-strokes and four-strokes boasting major changes and updates throughout. MotoOnline.com.au recently attended the international media launch in Spain, where we were able engage with the engineers behind the revolutionary enduro bikes, and ride each and every model in the selection. In this edition of Countdown, and in no particular order, we highlight eight key changes for MY2020. 8. Re-designed bodywork:
All riders of the Red Bull KTM Factory Racing Team were involved in shaping the bodywork of the latest EXC model generation, together with specialists from KTM R&D and Kiska Design. Their common goal was to achieve complete harmony between rider and bike, down to the finest details. This resulted in all new polymer components that provide perfect ergonomics and contact points for the rider, combined with maximum freedom of movement and improved handling. The I-beam design of the front and rear fenders is a prime example of an intelligent solution, creating maximum stability from the least possible amount of material through a well-thought-out structure and mounting.

7. Upgraded EXC-F engines:
KTM continues the powerhouse revolution with its range of four-stroke enduro motorcycles. For MY2020, all EXC-F models feature reworked engines and once again raise the bar when it comes to performance, power delivery and rideability. With KTM’s engineers working tirelessly to increase service intervals, the KTM four-stroke enduros are all fitted with the latest engine management technology. The state-of-the-art Keihin engine management system with electronic fuel injection features a new 42 mm throttle body, providing a vivid response and maximum performance thanks to its unique injector position. The ECU features updated mappings matched to the new exhaust, air filter box and engine configuration.

6. Revised chassis:
The entire KTM EXC range feature new, lightweight high-tech steel frames made of chrome molybdenum steel sections, including hydro-formed elements produced with state-of-the-art robots. The frames use the same proven geometries as before but have been re-designed in several key areas for an optimised stiffness to provide increased feedback to the rider, as well as delivering an outstanding combination of playful agility and dependable stability. Connecting the cylinder head to the frame, the lateral engine headstays of all models are now made of aluminium, enhancing cornering precision while reducing vibrations. In the 250/300 EXC frame, the engine is rotated downwards by one degree around the swingarm pivot for significantly more front wheel traction.

5. Enhanced cooling system:
All the new KTM EXC models feature re-designed radiators mounted 12mm lower than before, which significantly lowers the centre of gravity. At the same time, the new radiator shape and new spoilers combine to enhance the ergonomics. Carefully optimised using computational fluid dynamics modelling (CFD), the enhanced coolant circulation and air flow increase the cooling efficiency. The reworked delta distributor integrated into the frame triangle features a centre tube enlarged by 4mm for a 57 percent greater cross section, increasing coolant flow from the cylinder head to the radiators. The KTM 450 EXC-F and KTM 500 EXC-F are fitted with an electric radiator fan as standard. 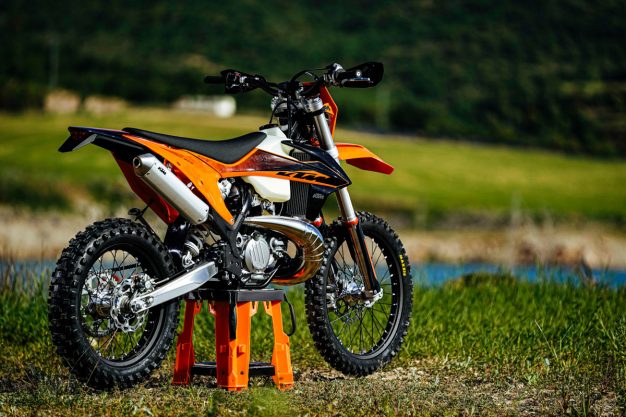 4. Refined exhaust system:
The KTM engineers put a lot of effort into developing completely reworked exhaust systems for all EXC models. The new components are key factors behind the enhanced power delivery and performance of the new bikes, while providing slimmer ergonomics and reliable compliance with racing noise limits. The 250cc and 300cc models feature new heavy duty exhaust pipes made by KTM using an innovative 3D stamping process that makes it possible to provide the outer shells with a corrugated surface. This renders the pipe a lot more rigid and resistant against rock and debris impacts, while significantly reducing noise. The four-stroke models now feature two-piece header pipes for a more user-friendly dismantling, while providing better access to the shock absorber. A new, slightly wider aluminium sleeve and end cap result in more compact and shorter main silencers, bringing the weight closer to the centre of gravity for increased mass centralisation.

3. Updated suspension:
The fleet of 2020 EXCs are fitted with the WP XPLOR 48 upside-down fork. A split fork design developed by WP and KTM, it’s equipped with springs on both sides, but with separate damping circuits, with the left-hand fork leg damping only the compression stage and the right hand one only the rebound. This means damping is easily adjusted via the dials on top of both fork tubes with 30 clicks each, while the two stages do not affect each other. Already distinguished by outstanding response and damping characteristics, the fork receives a new, calibrated mid-valve piston for MY2020 to provide more consistent damping, as well as new upper fork caps with new clicker adjusters for easier adjustment. New settings keep the front end higher for enhanced rider feedback and provide even greater reserves against bottoming out. Fitted to all EXC models, the WP XPLOR PDS shock absorber is the key element of the proven and successful PDS rear suspension design (Progressive Damping System), where the shock absorber is directly linked to the swingarm without an additional linkage system. For MY2020, an optimised second piston and cup with a reworked shape and seal lead to further increased resistance against bottoming out without diminishing the ride. The new XPLOR PDS shock absorber provides enhanced damping characteristics and better hold-up while perfectly matching the new frame and reworked front end setup.

2. TPI two-strokes:
KTM sets the benchmark in terms of two-stroke technology with its comprehensive range of race winning off-road competition two-stroke bikes. Two years after the introduction of the revolutionary TPI technology – the world’s first electronically controlled two-stroke fuel injection system – the success story continues with a new generation of completely reworked two-stroke competition enduros all fitted with TPI, now including the all new KTM 150 EXC TPI. The benefits are clear – besides huge improvements in fuel efficiency and clean exhaust emissions, the electronics do away with the need for re-jetting, no matter what the elevation of the race venue, prevailing weather conditions and the like. In addition, engine lubrication is automatic, fed by an electronically controlled oil pump from a separate oil tank to obviate the use of pre-mixed fuel-oil mixture.

1. Reworked air box:
The new air filter box has been completely reworked in terms of gas dynamics, ensuring enhanced intake airflow for optimum performance and throttle response. In addition, the new design offers maximum protection of the air filter against clogging. All two-stroke models now feature new intake funnels adapted to the new engine or engine position respectively and accommodating an intake air temperature sensor. The large Twin Air filter element is mounted on a rigid cage, which at the same time forms the air filter box mount. An original example of practical KTM design, the filter can be easily changed without tools in seconds. Despite the new air box, the MY2020 EXCs still use the same filter from the previous generation.