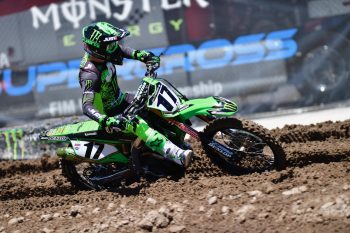 The Monster Energy Kawasaki Factory Racing contender has been experiencing an ongoing shoulder injury from Nashville’s supercross, while he was forced to miss Las Vegas’ finale after suffering a heavy fall in qualifying, resulting in a hematoma in his leg.

Savatgy is hopeful returning for Thunder Valley’s third round, scheduled on 2 June, as the series kicks off this weekend at Hangtown.

“Unfortunately I won’t be lining up for the start of the outdoor series,” Savatgy revealed. “Between my nagging shoulder injury and my leg issue from Vegas, the goal right now honestly is Colorado at best. I’m bummed, haven’t missed a start of the MX series since 2014. But I want to get healthy and comeback 100 percent.”

Savatgy experienced a mixed rookie campaign in the supercross champion, recording a number of impressive finishes, however it was ultimately marred by injuries.