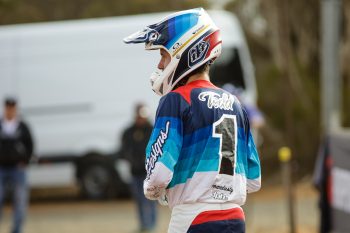 Despite being signed with DPH Motorsport Husqvarna in Australia, Todd will pilot a KTM 250 SX-F arranged through Troy Lee and the TLD Red Bull KTM squad, which comes after a number of failed attempts to secure a FC 250 during his stay.

“[I] flew over to California on Friday to start trying to do some riding,” Todd revealed to MotoOnline.com.au. “I’ll be here for the first two nationals at Hangtown and Fox Raceway, and if maybe an opportunity came up to do any more with a team or support, I’ll do more.

“I’ll be riding a KTM for this one – it’s been a big mess organising a bike, and I have been through so many different plans that were all to do with Husky, but on Thursday or Friday my good friend Johnny McLean and I spoke about trying to go with an opportunity of using one of the Troy Lee bikes, and on Saturday we were good to go. The team and Max Lee helped me with one of their bikes to ride.

“We have a big break and it would be so hard to keep motivated and focused to keep grinding with weeks on end of no racing, so coming over here is keeping me motivated to keep pushing hard and not get sidetracked. Also, no team overseas will ever be interested in me via email – I have to get out and start showing my name and that I can be worthy of a job.”