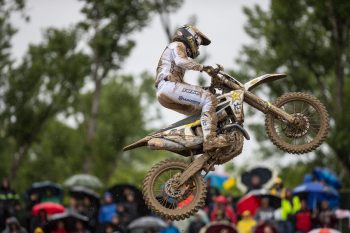 Former MX2 world champion Pauls Jonass emerged with his maiden premier class podium at the MXGP of Lombardia on Sunday, signifying a ‘very special moment’ for the Latvian as he stood alongside nine-time world champion Antonio Cairoli (Red Bull KTM Factory Racing) on the rostrum.

The Rockstar Energy Husqvarna Factory Racing rookie has been making steady progress in his debut campaign, coming back from ACL surgery completed during the off-season.

Jonass lodged a highly-impressive 3-2 scorecard at the Italian venue in rain-soaked conditions, granting him runner-up honours to points leader Cairoli.

“This weekend has been really great,” Jonass expressed. “I think the qualification race, even if I didn’t get the result I hoped for, was really important for me. Getting a good start and running close to the front really gave me a lot of confidence, which I took into today’s racing. Of course, the track was muddy, but I like the mud, so I felt good.

“I didn’t get perfect starts, but I managed to make some quick passes and avoid making any big mistakes. Getting the runner-up result in the first moto felt so, so good. The track was a little more one-lined in the second moto but again I felt good. I felt like I was a little quicker than Bogers but I got sideways a few times trying to pass him, so I decided not to take any more chances and just settle down.

“Getting a good overall result is much more important. To finish second overall, to get my first MXGP podium, to be stood on the box with Cairoli, it’s a very special moment for me. I feel like something has clicked in a positive way now with racing a 450. I’m not at 100 percent yet but I’m feeling a lot more confident and this result gives me a lot of motivation to keep working hard.”

The 22-year-old sits eighth in the MXGP World Championship standings as the series returns to action this weekend at Agueda in Portugal.