Young and Lettenbichler complete the podium at Portugal's season-opener. 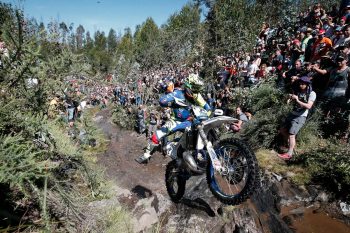 Sherco Factory Racing’s Mario Roman has taken an early lead in the battle to become this year’s ultimate enduro champion, claiming victory at the Toyota Porto Extreme XL Lagares in Portugal for round one of the 2019 World Enduro Super Series (WESS).

Among the 300 competitors entered, over 50 pro riders took to the start line of the demanding two-hour long course, which was to be completed twice. Notoriously difficult, the addition of blisteringly hot sunshine ensured a punishing start to the 2019 WESS championship.

Graham Jarvis (Rockstar Energy Husqvarna Factory Racing) initially looked to have snatched third from Lettenbichler on corrected time, but the German was awarded time he lost on lap one due to a track marking error and finished on the podium. With Jarvis in fourth, reigning champion Billy Bolt (Rockstar Energy Husqvarna Factory Racing) completed the top five.

The World Enduro Super Series now heads to France for the Trefle Refle Lozerien on 17 May, marking round two of the series.