Evans shy of the podium in Mantova MX2 encounter 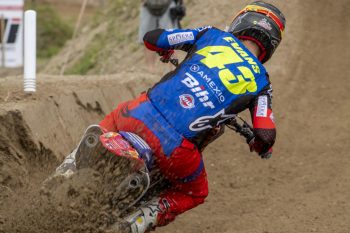 Australian Mitch Evans finished just shy of the overall podium at Mantova’s fifth round of the 2019 MX2 World Championship in Lombardia, Italy, over the weekend.

In rain-soaked conditions, the Team Honda 114 Motorsports rider put on a strong display of riding as he pieced together an 8-6 scorecard for fourth overall.

It’s the Queenslander’s best overall placing since the season opener at Argentina in March, which saw him emerge with a stunning podium while making his debut in the world championship.

The number 43 has since recorded a string of steady results inside the top 10 during his rookie season, positioning him eighth in the championship rankings as the series resumes this weekend at Agueda in Portugal.

Compatriot Jed Beaton (Rockstar Energy Husqvarna Factory Racing) also put in a glowing performance at Mantova, however his overall result was hindered by a heavy fall in race two. He salvaged 17th in the encounter, and paired with an exceptional third in the opening race, he was credited seventh overall.