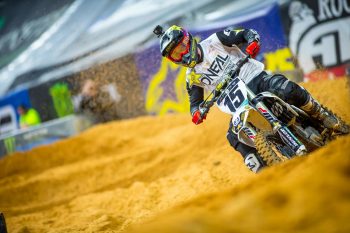 Wilson was fighting for position when a rare mechanical malfunction struck his FC 450 at Denver’s supercross while negotiating a rhythm section, prompting him to crash heavily and sustaining shoulder damage in the process.

Confirming he’ll remain with the factory Husqvarna squad for the outdoor series, Wilson has declared he’s doing everything possible to make round one, although he acknowledges it will be unlikely.

“I have been doing all I can to get back to 100 percent doing my therapy/training and all sorts of remedies, but sometimes the body just needs to do its thing and heal,” Wilson explained. “The goal was to be at the first round of outdoors but chances of that may be slim.

“I will be on the factory Rockstar Husky team all summer for those asking. Taking this day by day as it’s very frustrating – I want to be out there so bad. I will come back when I can!”

Wilson started the year out as a privateer aboard Husqvarna machinery, however was drafted back into the factory team after Jason Anderson was ruled out with injury. The team has since signed him for the entire Pro Motocross championship.