Triumphs, defeats and controversies from the 2019 season of supercross.

The 2019 Monster Energy AMA Supercross Championship delivered on all fronts, offering incredible triumphs, crushing defeats, and it’s fair share of controversy. In this instalment of Top 10, we narrow down the moments that made up the 2019 supercross season. 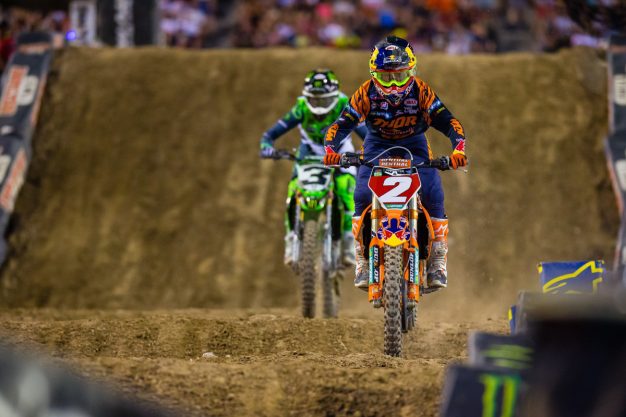 1. Webb clinches 450SX crown:
Following two difficult seasons in the premier class, Cooper Webb wasn’t even on the radar as a title favourite in 2019. That quickly changed for the Red Bull KTM Factory Racing newcomer when he lifted his first victory at the third round, and then backed it up a week later to gain the points lead. He never looked back, controlling the championship right to very end in Las Vegas.

2. Reed’s Detroit podium:
You can never count out Australian fan-favourite Chad Reed to deliver something special. At Detroit’s eighth round, the JGRMX Yoshimura Suzuki Factory Racing rider broke through for third overall in the Triple Crown format, extending his all-time podium record to 132 at 36 years of age!

3. Cianciarulo’s crushing title loss:
One of the most well known and highly-anticipated amateurs to come through the ranks, Adam Cianciarulo (Monster Energy Pro Circuit Kawasaki) has been plagued by injuries for most of his professional career. The Kawasaki pilot was in line to take out the 250SX West crown, although a critical error at Vegas saw him damage his motorcycle, relinquishing enough positions to ultimately cost him the title.

4. Underdogs lift 250SX titles:
Adding to Pro Circuit’s crushing season, Austin Forker, the favourite for the 250SX East title after winning five of the first six races, was later ruled out with a season-ending knee injury. The duo’s misfortune opened up the titles to who were pre-season underdogs – Dylan Ferrandis (Monster Energy Yamalube Yamaha Star Racing) and Chase Sexton (Geico Honda). The pair capitalised in the end for well-earned titles in the West and East divisions respectively.

5. Baggett steps up:
We’ve always known Blake Bagget (Rocky Mountain ATV/MC KTM) was a strong rider, but he really displayed what he’s made of this season. Earning a maiden victory at round two, the former Pro Motocross 250MX champion scored a number of podiums throughout the year to wind up fifth in the championship standings. 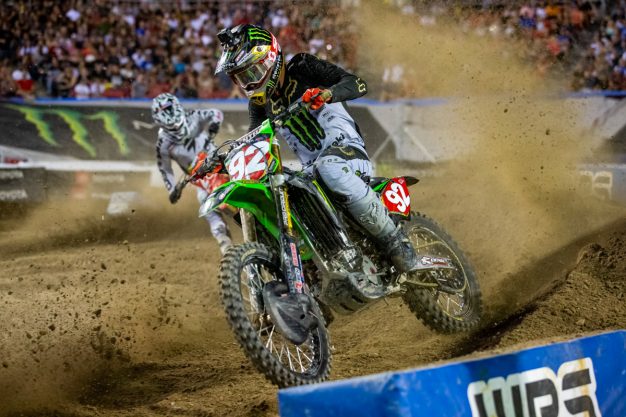 6. Too little, too late for Tomac:
Monster Energy Kawasaki’s Eli Tomac was always a contender for the crown, but it was too little, too late for the two-time Pro Motocross champion. He notched up six victories – one less than Cooper Webb – however some struggles earlier in the season saw him finish 18 points behind the champion in second position.

7. Roczen fizzles:
A strong start to his comeback supercross season looked promising for Team Honda HRC’s Ken Roczen, however at around the halfway point, things started to go downhill for the popular German contender. There’s a reason behind that, though – Roczen has been battling a mystery illness that’s increased fatigue. Despite that, he still pushed through for some impressive performances and an array of podiums.

8. Wilson regains factory support:
For the second time in his career, Dean Wilson was forced to take the privateer route after being left without factory support. He led majority of A1 before claiming fourth, then put in some strong showings to land a role back with Rockstar Energy Husqvarna Factory Racing. He rewarded them with a podium at Houston.

9. San Diego drying agent saga:
Back at round five, in yet another mud race, a drying agent was used to help boost track conditions, however, the agent, a mix of lime and sand, caused skin irritation to a number of riders while additional damage to their machines was also sustained in the encounter. Riders expressed their concerns, and the promoter later addressed the issue, even compensating affected entrants!

10. Lawrence a no-show:
Every supercross fan in Australia – and even across the globe – was hanging out for the highly-anticipated debut of Queenslander Hunter Lawrence, but it just wasn’t to be. The Geico Honda ace suffered a broken collarbone in the lead up this maiden supercross race, prompting him to sit out the remainder of the series and instead focus on the upcoming Lucas Oil AMA Pro Motocross Championship.