Maddison to perform trifecta of stunts in Wollongong 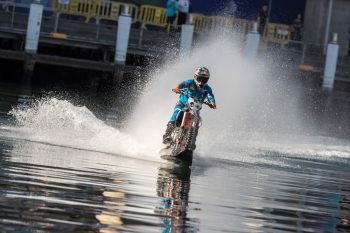 Australian FMX and stunt icon Robbie Maddison has revealed he’ll perform a trifecta of land, sea and air stunts at Wollongong’s third round of the 2019 Australian Supercross Championship and the Australian Motorcycle Festival on 9 November.

Maddision is anticipated to put on freestyle display inside WIN Stadium on Saturday night, while he’ll attempt a water and high-air stunt at Lang Park during the newly-branded motorcycle festival.

“I can’t wait to come home to the Illawarra,” said Maddison. “The supercross is going to be incredible in WIN Stadium and to perform in front of a packed stadium will be something very special.

“Make sure you get to the ‘Gong early on Saturday, 9 November for the Australian Motorcycle Festival and enjoy two more stunts that I will attempt. I am not announcing just yet what stunts fans will see but let me say, I am going for the trifecta – land, sea and water of stunts!”

Maddison has performed incredible stunts including multiple world long distance motorcycle jumps, jumping the Corinth Canal, jumping from the ground up to the top of Las Vegas replica Arc De Triomphe and then back down, and surfing waves in Tahiti his custom waterbike.