Gibbs anticipating to be fit for Manjimup 15,000 alongside Clout 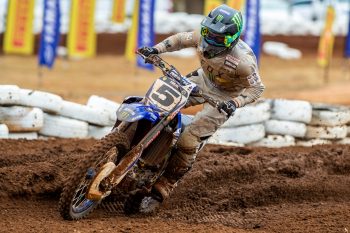 Former Australian motocross champion Kirk Gibbs is anticipating to be fit for the 2019 Manjimup 15,000 in Western Australia on 1-2 June, where he’ll be joined by CDR Yamaha Monster Energy teammate Luke Clout.

Gibbs sustained a title-ending shoulder injury at the weekend’s Pirelli MX Nationals double-header in Murray Bridge, which saw him sit out Sunday’s racing after enduring the heavy fall in the final moto of Saturday’s fourth round.

The number five is confident his shoulder will be at an adequate level for the prestigious motocross race, which he has won three occasions, and currently sits one victory shy of matching the all-time win record shared by current boss Craig Dack and former team manager Jay Marmont.

“I have done Manjimup a few times over the years and it is an event that every motocross racer should do,” Gibbs explained. “It’s an amazing track to ride that offers challenges in its layout, its terrain and its physical demands. The atmosphere at the venue is also nothing like we experience back on the east coast.

“There is always a big crowd on hand that line the entire track and make plenty of noise as they watch the races. They are motocross people who know about the sport and are enthusiastic to cheer on their favourite rider. My shoulder should be good to go and I’m looking forward to heading back to Manjimup and catching up with all the WA fans.”

Clout, who took hold of the MX1 points lead at the weekend, will take to the Cosy Creek circuit that hosted the 1992 Motocross of Nations (MXoN) for the very first time in his career.

“I have heard so many good things about Manjimup and it’s awesome to know I will finally be taking the trip over to contest the event,” Clout commented. “Dacka has told me so many stories about his time racing Manjimup and I hope my time there is half as exciting as his.

“And I’m not sure if I can bare another story about riding a 500cc two stroke on a track rough enough to swallow an ocean-liner. I have seen the track on video and watched some races there and it looks like such a fun track to ride. The schedule looks hectic with six motos during the day but that’s fine with me and I can’t wait to get behind the gate and race Kirk as well as all the WA riders.”

Yamaha Motor Australia’s sales and marketing manager Matt Ferry spoke of the importance of making an increased presence at the Western Australian event: “WA is sometimes over-looked for major motorcycling events but Yamaha Australia want to keep in touch with our WA customer base and having the CDR Yamaha Monster Energy Team work in conjunction with our local WA race teams and dealers is a great way for us to show case the powerful YZ range.

“Last year, Dean Ferris represented Yamaha at the event and took home the victory while this year, both YMA and CDR Yamaha have stepped it up and we now have both of our factory riders contesting the event and mingling with WA dirt bike fans.”