Factory Yamaha contender to sit out this weekend's MXGP at Mantova. 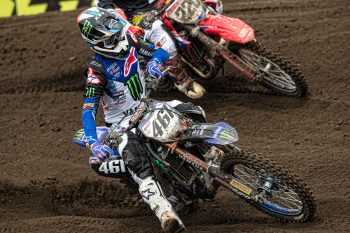 Former champion Romain Febvre has confirmed he’ll sit out this weekend’s fifth round of the 2019 MXGP World Championship at Mantova in Italy, as he targets a return from injury at the MXGP of Portugal on 19 May.

The Frenchman has since returned to riding, taking advantage of the recent five-week break in the series, however doesn’t feel up to standard to challenge this weekend’s round.

“It has been good to be back on the bike,” said Febvre. “At the moment my ankle is not perfect but it’s good enough to ride and to put some hours on the bike. It gets better every day, but it needs more mobility, so I am able to put my foot where I want, especially on hard-pack corners, but it has been good to start training.

“Right now, I am trying to catch the time back on the bike and it is cool that I can train with Monster Energy Kemea Yamaha MX2’s Ben Watson, which helps me get back into the rhythm because we can push each other and it’s really good for me. Much better than riding alone. I am hoping to be back for Portugal, but if I’m not ready, I think France.”