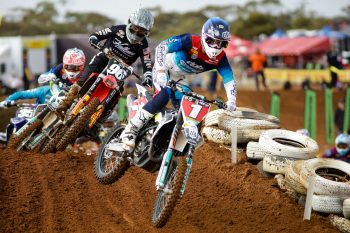 MX2 red-plate holder Wilson Todd is thankful to have escaped wheel damage in race one of Sunday’s Pirelli MX Nationals in Murray Bridge without suffering a serious dent to his championship lead.

The DPH Motorsport Husqvarna rider was locked in a duel with Kyle Webster (Penrite CRF Honda Racing) in the opening encounter of round five, leading the outing before writing off a rear wheel, forcing him to relinquish the lead and stop into the mechanics’ area.

After switching out the wheel – which was fitted with an alternate tyre option – Todd put on a charge to salvage 14th, and paired with a stunning race victory in moto two, he was granted fifth overall.

“It was a tough weekend for me,” Todd commented. “I don’t like the Murray Bridge track all that much and I haven’t had the best results here. The first moto on Sunday saw me destroy a rear wheel while leading, and have to pull in for Pynee to swap it over, getting back on track in 18th.

“I managed to stay on the lead lap, put in the fastest lap of the race and finish 14th. Lining up for the last race I was motivated, got the start and led start to finish. It wasn’t an ideal weekend, but I salvaged points in bad races and I head into the break with a 23-point lead and a lot of confidence for the second half of the year.”

Boasting a 23-point lead, Todd will return to action following a lengthy break in the MX Nationals, with the next round scheduled for 23 June at Gympie in Queensland.