Updates made to popular motocross range for year model 2020. 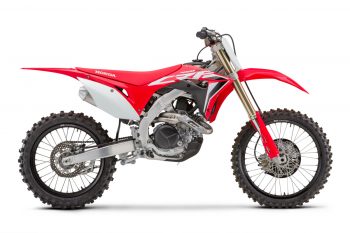 The 2020 edition Honda CRF450R and CRF250R models have broken cover, with the manufacturer confirming a host of refinements for the new year model.

The Honda CRF450R has become known for balance and agility, and as such has always offered its rider – whether amateur enthusiast or pro-racer – total control and the chance to get the very best from their ability. Plus, of course it’s built with the durability and longevity that Honda has long been famed for.

For 2020, the CRF450R gets a new electronics package to make it faster over a lap, yet with even more control. Alongside optimised PGM-FI engine maps and HRC Launch Control, for 20YM the CRF450R gains a new Honda Selectable Torque Control (HSTC) system, with the riding modes to assist every rider, from beginner to pro, to manage rear wheel traction and gain drive.

The CRF450R’s frame and swingarm are unchanged but there are new compression damping settings for the Showa suspension. The rear brake gets a pad material revised for durability, and the battery box is re-sited. New graphics for the radiator shrouds complete the update.

The MX2 class is a relentless close-quarter battle – elbow-to-elbow action where every fraction of a second counts. Honda’s CRF250R has proved itself a worthy weapon for the fight. Competition has led its evolution over time, through increments and steps, into a platform that the amateur MX enthusiast – as well as pro-racer – can extract the utmost out of, every metre of every lap. 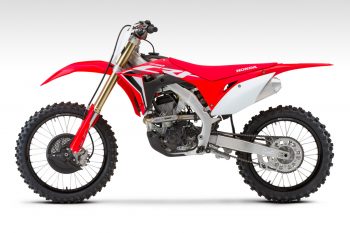 The CRF250R moves forward once again for 2020, offering a boost to low to mid-range torque, while its frame and swingarm are new, mirroring that of the 19YM CRF450R.

Riders love the CRF250R’s top-end power hit, and after 19YM’s bottom-end improvement, focus of development for the 20YM machine was torque and power in the low-to-mid range. And Honda’s engineers have achieved just that – plus extra top end power – with extensive work to the combustion chamber.

The second gear ratio is now closer to third to reduce the natural drop in engine rpm when making that crucial upshift – clutch performance has also been improved. Detailed improvements to intake and exhaust efficiency, plus engine mapping all work together to achieve the overall goal of improved drive.

To match the engine upgrade the new CRF250R’s frame and swingarm are identical to the 19YM CRF450R. Both items are grams lighter but – more significantly – have a carefully tuned rigidity balance – combined with new compression damping settings for both front and rear Showa suspension, the result is improved stability, feel and accuracy while tracking through fast, bumpy turns.

Pricing and availability in Australia is still to be confirmed. For more information, visit www.motorcycles.honda.com.au.