Round four and five success 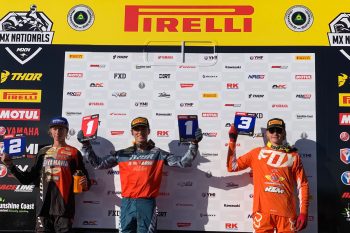 Last weekend the Raceline KTM Thor Team headed to Murray Bridge in South Australia, for the first of the season double header rounds. The riders were tested across the two days and with gruelling back to back motos.

Regan Duffy took out timed qualifying on Saturday and finished a solid third in moto one, Duffy dominated the second moto walking away with second overall on day one at round 4. Day two would see Duffy finished second in moto 1 and have a dominate ride in moto 2 leading the race from start to finish, Duffy’s performance on the day gave him the round win and guaranteed that he maintained the red plate going into the mid-season break.

Jye Dickson having his first ride aboard the factory Raceline KTM Thor team was put to the test across Saturday with a three moto format, consisting of practice/qualifying in the morning followed by two back to back gruelling moto’s then a traditional moto in the afternoon. Jye qualified 5th on day one and went on to finish 6th in the first back to back moto, and 16th in the second giving him a combined results of 11th, in the 3rd moto Dickson got 13th giving him an overall result of 12th for round 4 at day one.

Sunday went back to the more traditional format having practice/qualifying in the morning and a morning moto as well as an afternoon moto. Jye finished 10th in the first moto and 9th in the second giving him 9th overall at round 5.

The Thor MX1 class roared into life Saturday morning, consisting of practise/qualifying and a two moto format, Hayden Mellross rode a solid race in moto 1 but could only salvage 4th position, moto 2 Hayden put in a very impressive ride to walk away with a with 3rd giving him 3rd overall at round 4.

Sunday would see the Hayden Mellross challenged with the three moto format, consisting of practice/qualifying in the morning followed by two back to back gruelling moto’s then a traditional moto in the afternoon. Mellross got third in both the back to back motos and 3rd in the last moto of the day giving him 3rd overall at round 5.