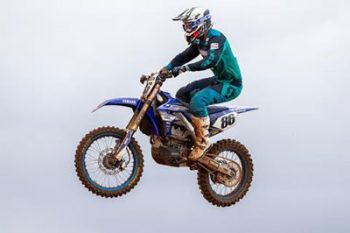 Held on consecutive days, the MX Nationals held their first double-header race weekend of the year in Murray Bridge, South Australia, to complete rounds four and five of the championship.

A consistent weekend from CDR Yamaha Monster Energy’s Luke Clout has landed the NSW-based racer in the lead of the premier MX1 (450cc) class as the series heads into a seven-week break, marking the halfway point in the championship.

Luke Clout: “It was a tough weekend with five motos on a track that always produces close racing. I love riding here and knew that I had to make the most of double-header weekend, so it was good to put together five good motos and leave here with the championship lead. It wasn’t without its challenges or issues, but the team and I worked hard and managed to make the most of each situation. The only real blemish over the weekend was the crash in race one on Saturday, but we were able to salvage what we could and the team was able to get the bike sorted out and back in perfect shape for race two.”

The Dunlop Geomax MX33 front and rear tread pattern was once again the tyre of choice in Murray Bridge. Usually a sandy, loamy circuit, many teams rolled bikes out fitted with MX12 rears, however, the drought-affected race track was unable to spare enough water to rip the circuit deeply, resulting in Dunlop racers switching to the MX33 for the harder than expected track.

With the track conditions resulting in a fast race pace and more limited opportunities to pass than usual, racers in all three classes were reliant on strong starts and concentration to ensure no mistakes on each lap.

The MX2 class saw a solid performance from Serco Yamaha’s Aaron Tanti on Sunday to secure third overall, while a more consistent Nathan Crawford (10-6 overall) slipped past his teammate for fourth in the championship. Yamalube Yamaha’s Jay Wilson once again leads the charge of Dunlop racers in the class, with a solid 2-4 overall for each round respectively to sit third in the MX2 standings.

Dunlop Motorsport Manager Robbie Bugden: “The MX Nationals continues to show that we have a talented pool of motocross racers in Australia. From MXD through to MX1, we’re seeing a number of different riders battling for the win each round. It was great to Max Purvis taking a well-deserved win on Saturday in MXD, and I enjoyed seeing Yamalube Yamaha’s Richie Evans ride a more consistent weekend with two sixth-place MX1 overalls. It was a challenging weekend for both riders and teams, with the unexpected track conditions and two days of high-intensity racing. I’m excited to see Luke Clout head into the mid-season break with the MX1 Championship lead, Max Purvis second in MXD and Jay Wilson holding third in MX2.”