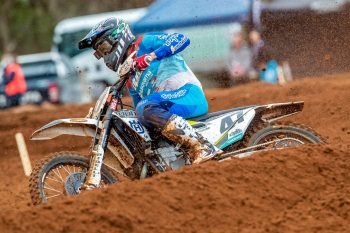 Fresh from victory at Murray Bridge’s fifth round of the Pirelli MX Nationals yesterday, Todd Waters has declared his intentions are to level up throughout the mid-season break by contesting the first three rounds of the Lucas Oil AMA Pro Motocross Championship.

The DPH Motorsport Husqvarna rider has been one of the strongest contenders in the highly-competitive MX1 class this year, although a mechanical DNF at Wonthaggi sees him positioned third in the standings despite recording four race wins and two overall victories.

Waters, a former MXGP World Championship regular, will race the same specification FC 450 at the Hangtown, Fox Raceway and Thunder Valley rounds as his current MX Nationals machine, in which he hopes the mini-campaign will boost his chances of riding to a maiden premier class crown on return in the final four rounds of the domestic series.

“The break for me is quite important, I want to push and try and lift my game again,” Waters told MotoOnline.com.au. “I’m pretty focused on this break – I think a lot of guys relax, but you kind of get lost because it’s such a long break. I’m going to hit it hard and see if we can find some more speed.

“I’ll be racing the first three outdoor championship races. It just works well with our break, and it’s all in California and super easy to get to. I’m doing it with my Kiwi mate Cody Cooper, so it should be fun and I’m looking forward to it. We’re getting a big camper, and Coops’ has a van as well, so we’re just going to pit up at the races.

“It’s pretty relaxed, and 450s are so competitive now, especially the Husqvarna – they have such strong engines – so I don’t need to worry about competing with the factory teams on that side of things. I’ll have the same bike as I have here, so I’ll take all my stuff over there. Straight up I’ll be comfortable and know the thing, instead of getting on a different bike.”

The popular Queenslander is 10 points shy of MX Nationals championship leader Luke Clout (CDR Yamaha Monster Energy), who has one round win to his name.