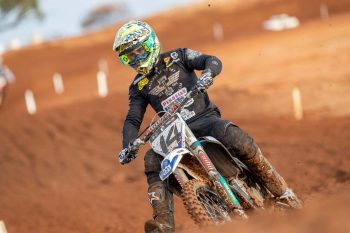 A motivated Jesse Dobson overcame a tough start to the first double-header weekend of the 2019 MX Nationals in South Australia, to head into the seven-week break in the national racing calendar sitting tenth in the MX1 (450cc) championship.

With round four consisting of two 16-lap races on Saturday, followed by two 8-lap back-to-back races and a third 16-lap race on Sunday to complete round five at the unusually hard Murray Bridge race track, Dobson raced conservatively through bike damage and set-up issues to gather championship points and head into the championship break healthy.

Jesse Dobson: “It was a bit of a struggle this weekend. The goal was to just get through the two rounds and head into the mid-season break healthy and I’ve managed that at least. We made a change in the rear spring rate after Broadford and it just didn’t work the way we expected it to, and I struggled with grip and to get the bike settled in the turns, making it a real battle every lap to ride smooth and strong. I was expecting a loamy track, but without much rain, they weren’t able to prep the track the same as usual and so we ended up on a pretty hard track with limited opportunities to pass and a lot of reliance on a strong start. Caught up in a crash in the first race of the weekend, another bike slammed into my rear wheel so hard that it smashed the hub and I couldn’t get back in the race, so from that point on, I was just looking to survive the weekend, stay out of trouble and capture as many points as I could in the process. It wasn’t an ideal weekend but I’m still on plan, and I’m happy the hardest part of the season for me is over and I can start my preparation for the second half of the championship. I also want to thank MXStore and Anchored Arts Tattoo Parlour for coming on-board to help me race this season.”

The MX Nationals now have a seven-week break, allowing Jesse some time to refresh his Husqvarna FC450, reset his training program on QLD’s Sunshine coast and prepare for the final five rounds of the season, three of which are in the home state for the 22-year-old, beginning with round six in Gympie on June 23.